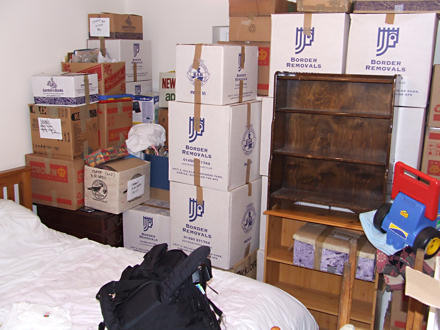 Off to Selkirk again for another overnight at Mum’s. Today was the day that Mum handed over the keys to her old house of 35 years. An emotional day.

We’ll be sleeping in the guest bedroom tonight (see photo above), amidst the boxes. Tomorrow’s task will be to reduce that pile of cartons to nothing, as we systematically unpack.

I’m looking forward to it, and to helping make Mum’s new flat feel more homely and hers.

Just to let you know, if you want to contact Mum: British Telecom weren’t able to connect Mum’s phone yesterday because the contractor still hasn’t had the flats connected to the public exchange. So in the meantime BT are going to redirect all calls to her home number to her mobile phone, for no additional charge.

It looks like it won’t be until mid-September that she gets her landline installed. But that, at least, gives us time to archaeologically remove the layers of boxes!

Yesterday I was going to blog about an exciting, fresh new website I’ve been working on. I was going to share with you something of my process of taking a website from an initial idea, through the various stages of design to launch. The site was going to be launched yesterday morning.

But then something happened.

During the last few months I’ve been working quietly and diligently on two Web projects for a couple of friends. I offered to work on them for free, in my own time, which — along with travelling back and forth between Fife and the Scottish Borders helping Mum out in preparing for her house move — has been the main reason that I’ve not been blogging quite as much as I’d like to.

Meanwhile my blog drafts have been piling up behind the scenes; here’s an insight into what is to come in the following weeks/months:

This week I was ready to go live with one of the projects, having more than put in the hours trying to fix bugs (mostly IE5.5 and IE6) this week.

On my snag list were a few IE fixes, a couple of print-related CSS files to write and a last-minute check to make sure that the Google AJAX Feed API was working properly. I finished the fixes around midnight on Tuesday.

The client has only static webspace, so I decided to use the Google AJAX Feed API to ‘pull in’ a newsfeed from a WordPress.com blog into their news page. It was a cheap and simple solution to add a bit of RSS loveliness and to enable the client to add content quickly and easily, without having to learn HTML.

So having been working closely with this client (a charity) and probably having racked up more than 40 hours working on the architecture, wireframes, design, coding and debugging, I was ready to go live.

I sent what I thought would be a quick, courteous email to the charity committee chairman to say that I was ready to go live, and unless there were any obvious reasons not to, I would go live yesterday morning at 08:00.

I was quite excited, to be honest. I was looking forward to it going live; proud of what I’d put together: the most Web 2.0 web design I’ve ever done, contemporary, fresh, fun and accessible, with a tip-of-the-hat to a couple of retro elements. How wonderfully postmodern. And the use of the Google AJAX Feed API, I felt, was quite an elegant solution.

And then the phone rang … and a couple of emails popped into my inbox. All saying the same thing:

Yeah … because website design by committee is always so much easier (irony!).

I’m disappointed, partly because I’m usually so good and making absolutely sure at the start of a project that I’m dealing with the right parties, that I’m not caught up in the the politics of the organization and from the word ‘go’ I know with whom I’m supposed to be liaising.

I thought I’d done that. I was obviously very wrong, I’ve now clearly stepped on some toes for which I’m very sorry, and so I spent most of yesterday evening composing an email to the committee chair explaining where I think things went wrong and how we might move forward with this. But, at the end of the day, I can only really go on what I’m told.

The upshot of it all is that my new, shiny, rounded-corners and Web-2.0-gradients website may not be going live any time soon. Which, while understandable, is disappointing.

Not least because I could have been spending those 40+ hours doing something more profitable. Like writing a free website for client #2. Or reading another Douglas Coupland novel. Or playing Battlefield 2. Or reading up on the ethics of IVF. Or building a Linux box. Or … you get the picture. 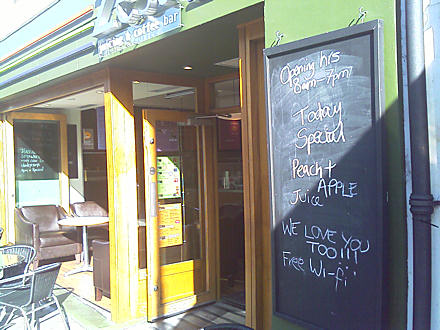 I’m not sure if this is in response to the “I love you” chalk graffiti around St Andrews just now, but I spotted this sign outside Zest, a juicing and coffee bar on South Street: “We love you too!!!”

Walking to work this morning I was impressed with the quality of the graffiti in St Andrews: 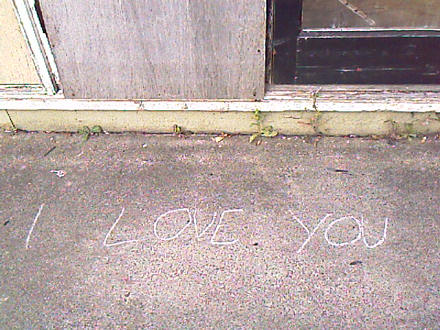 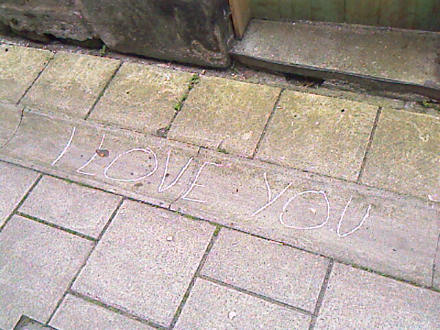 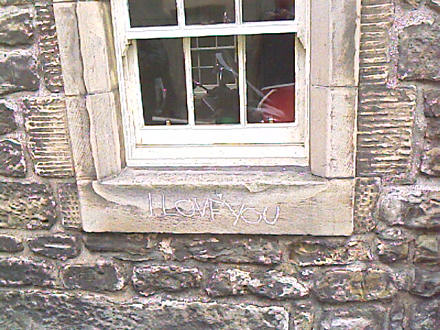 I love you too! 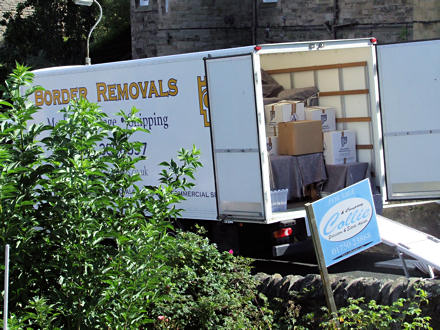 Wow! Well that was one long, tiring and emotional roller-coaster of a week. For the last six days I’ve been in Selkirk (in the Scottish Borders) helping Mum move house; I got back late last night and pretty much went straight to bed.

Here’s how my week has been:

I spent all morning, and much of the afternoon cleaning our house (in Anstruther) from top to bottom. I wanted to leave a tidy, clean house for Jane so that she didn’t have much to do this week — I knew that it would be a long, tiring week for her.

So, I arrived in Selkirk at 17:00. Mum had spent the day communicating with lawyers, estate agents and the Halifax building society trying to make sure that the bridging loan would come through in time … it was a nervous wait overnight.

Mum suddenly realised that she needed buildings and contents insurance for her new flat. When I arrived she was on the phone arranging it.

We finished as much as we could in preparation for the removals firm coming in at midday on Tuesday to begin the packing.

I phoned the removals firm to confirm when they’d be arriving. They confirmed 08:30 … on Wednesday!

The Halifax phoned to say that it was looking unlikely that the bridging loan would go through in time for a move on Wednesday, but they’d do everything they could … the snag was that there were a few things that would need to be looked into by both of Mum’s lawyers (buying and selling).

I telephoned the removals firm and made contingency plans should the loan not come through.

Mum returned a began chasing up one of the lawyers, who still needed to confirm something with the Halifax. If he could do it before 14:00 then there was now a good chance that the loan would go through in time. The Halifax sent them a fax around 11:30.

Mum got through to the lawyer’s office. He was on a call, he’d phone back. He didn’t phone back.

Mum eventually spoke with him around 15:00 (too late for the loan to complete). “What fax?” he said. And then laughed, “Oh! Oh! There’s a fax on the fax machine from the Halifax.”

The phone rang. It was the lawyer, he’d sent the required information to the Halifax. Oh, and the sale of the house had just been completed. The missives were signed, there was no way that the sale would fall through now. Mum and I both visibly breathed a sigh of relief.

It was doubly good news: now that the sale was completed it meant that Mum’s bridging loan would go through as a closed rather than open bridging loan, because there was a guaranteed limit to the length of time required on the loan. That’s a saving of about £700 for Mum.

The phone rang again. It was the Halifax: Mum would have to go to the local branch of the Halifax Bank of Scotland to sign the papers. The money would be queued for processing the following day, anytime before 17:00.

On Tuesday evening I took Mum out for a meal to celebrate, and then a drive around the Borders countryside. We needed to get out and away.

Removals day. At 08:30 sharp Border Removals turned up with two lorries and six men. They had most of the house packed and cleared in 90 minutes, when one lorry and three men disappeared to attend to another job.

Mum’s lawyer phoned around 11:00 to say that the money was in. She’d have to write a cheque, deliver it to the estate agents and then she’d call back to say that the flat was Mum’s.

After Mum went up to the lawyer’s office to sign the papers, I went down to the flat with the vacuum cleaner to hoover the carpets only to discover that the floors were up and Mum’s gas supply was being fitted to the living room. 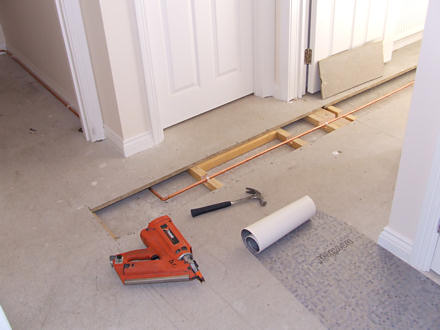 The removals men arrived just as the joiner (carpenter) was hammering down the last few nails. The lorry was unloaded and by 14:30 they had gone. 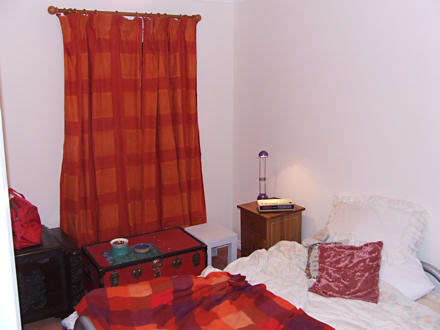 On Thursday a couple of men arrived from The Fireplace, Hawick to knock a hole in the wall. 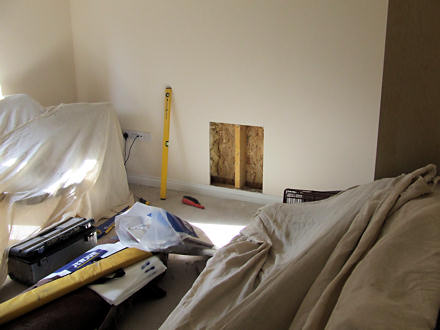 Limited unpacking today: I was exhausted, both physically and emotionally. Besides we couldn’t do much until the gas fire was in (Friday) and the carpets down (Monday).

The fireplace men came early (08:15) and began to install the gas fire and limestone fireplace … 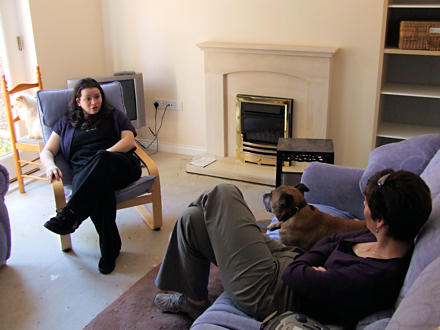 … which looks fantastic. Roll on Monday when the vinyl (hall and kitchen) and carpet (living room) are laid. Then the unpack-proper can take place.

But already Mum’s new flat is beginning to look like a home.

Praise the Lord for

See all my photos of the move on Flickr: Mum moves house (August 2007) collection.

Comments have been disabled due to the amount of comment spam I’m getting from removals firms!