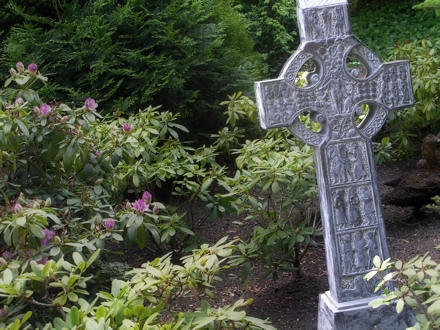 Photo by gabriel77 at stock.xchng

Great Aunt Mary’s funeral went really well yesterday; thanks to those who prayed for me / us / it. Preparing for it was the really hard bit; standing at the lectern, in front of my family was the easy bit.

Here’s my tip for preparing for a family-member’s funeral: cry beforehand. Find the space, if you can to cry while preparing the service, while writing the eulogy or the prayers, or collecting it all from the printer at the end of the desk. Get it out of your system beforehand. My word that really helped me yesterday. Phew!

I turned up at Warriston Crematorium about 45 minutes early. Bad idea. There was a huge funeral taking place, the car park was full, there was a queue even for the hearse for the next funeral to get in. So I slipped past them and found myself following a road to … well, goodness knows where. That’s an area of Edinburgh that I’m not familiar with.

Then Jane phoned. I didn’t have my hands-free kit on, so tried my best to stab at the “Speaker on” button on my Xda.

She couldn’t. I pulled in at the side of the road and called her back.

I found my Edinburgh A-Z and worked out where I was. I was on Logie Green Road. Serendipitously Jane was about two minutes away by car. She found me, we parked her car, paid for parking (no thanks to the broken pay-by-mobile-phone service mPark, which appeared to be down across Edinburgh that day) and headed to the crematorium in my car.

One thing that I don’t like about taking services at crematoria is that it feels like a conveyor belt:

I understand that it has to be done like that, but it feels rushed and impersonal. At least with services in church buildings there is not the same sense of rush during the service, regardless of the cross-town dash (at < 20 mph) to the crematorium or graveside afterwards.

Sometimes, however, the conveyor belt slows down.

For the small chapel at Warriston you’re given 40 minutes, which includes getting in and getting out. We got in 10 minutes late because one of the previous funerals had over-run. I was asked if I could try to pick up some of the time. We were out in 25 minutes (which is right on target) and the next family was going in at 15:10, right on time. And it didn’t feel rushed. Well done me!

Part of the role of the minister conducting the service is not to pass on any of that urgency to the family or friends grieving. The minister is like a buffer between the crematorium (where I’m allowed to carry out my professional duties) and the family and friends of the deceased (who have entrusted me with the task of helping them manage this rite of passage). The family shouldn’t have to worry about the crematorium’s timetabling upset: they’re upset enough with more important matters.

Space … at the final frontier

In what I said and how I said it I tried to create space, space to just ‘be’. Space to reflect and give thanks and ask for God’s presence in this situation. Space for grief, space for hope; space to say goodbye and space to look ahead, to carry on our family’s journey one person fewer, but richer for having shared that space together.

Meanwhile, behind the lectern — in my interior space, if you will — I was aware of the clock straight ahead of me on the wall; aware of the attendant’s shadow dancing nervously behind the glass outside; wondering if there was anything that I could cut from the order of service to make up time (I didn’t); aware that the last hymn had four verses and a chorus, and wondering if we could sing it all in less than three minutes.

Which is why finding that space to cry earlier in the day was really important: there’s not the time to deal with your own emotions while trying to liturgically guide others’ during a service. And anyway, having the minister sobbing uncontrollably at the front of the service doesn’t leave people with the same sense of hope … funnily enough!

Twenty-five minutes later we were standing outside once again in the sunshine. I shook a few hands, heard a few compliments about how nice the service was, and then nipped back in to get unchanged (out of black cassock, white cotta and violet stole).

The organists were swapping over. They do it in shifts, did you know that? The new organist needed to see the list of funerals; my jumper was sitting on it. I chatted with ‘our’ organist about the final hymn, “How great thou art” and how in CH4 (the new Church of Scotland hymn book) it looks as though there are only three verses, when there are really four. That’s a little insight into crematorium ‘back-stage’ banter.

The rest of the day was spent with family, first at the Victoria Park Hotel and then back at my brother’s, where little Owen climbed all over me and ‘switched me off and on’ with the cordless telephone!