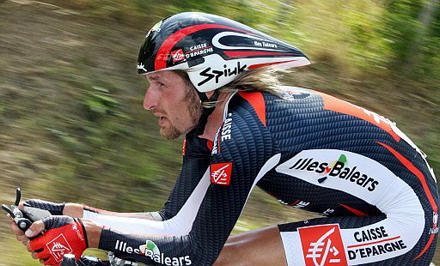 So … shortly after Le Tour de France passed the final stage over the Pyrenees it now finds itself with an even steeper climb: rebuilding people’s confidence (should that be Cofidis?) in cycling and the complete expulsion of drugs and doping from the sport.

Out of the tour

I woke at 06:00 this morning to the surprise news that race leader Michael Rasmussen had been forced out of the tour for lying about his out-of-competition drug tests. Yesterday Moreni’s bloody sample proved positive for testosterone, on Tuesday Vinokourov left when a routine test showed that he’d been indulging in the dangerous pastime of blood doping. What news will we wake to tomorrow?

In the case of Vinokourov we have still to await the results of his ‘B sample’ to see whether he really was blood doping or not. But if he was — and certainly in the case of Moreni — how could they possibly think that they’d not get caught out?!

The speculation around Rasmussen’s missed tests has been going on for a couple of weeks now, so it’s disappointing (not least for him) that it took this long — after 76 hours of cycling and more than half-way round France — before the decision was finally made to kick him off the tour.

Rasmussen claims that he was and is clean of drugs,

“Of course I’m clean,” Rasmussen said. “Like I said, I’ve been tested 17 times now in less than two weeks. Both the peleton and the public, they’re just taking their frustration out on me now. I mean, all I can say is that by now I had my test number 17 on this Tour and all of those have come back negative. I don’t feel I can do anymore than that.”
(Source: Yahoo!)

I have to be honest and say that I believe him. That may explain his more relaxed (though some might argue ‘unprofessional’) attitude to it all. I don’t, for example, pop into my local Police Station every morning just to report, “Just to let you know, officers, I’ve not committed any crimes since yesterday!”

So if you’re clean and miss a test you might easy say, “Ah well, it doesn’t matter so much: I’m clean anyway”. But with a sport so desperate to clean up its image that excuse obviously doesn’t sit well with those on the sport’s ruling boards.

Rasmussen originally claimed that he was in Mexico at the time of the out-of-competition drugs test, when in fact he was really in Italy. Maybe he’s just really rubbish at geography!

A question of sport

No doubt we’ll now find some pundits looking back at various stages of the tour and question his abilities (as they have done aleady with Vinokourov) and try to attribute every sign of talent, ability or unexpected achievement — such as during the time trial — to the effects of drugs.

The truth is that, even without the boost that testosterone, EPO or a syringe full of your best friend’s red blood cells is going to give you, these cyclists are better than you or I will ever be on two, self-powered wheels; and they are all human and will all have good days and bad days. The champions, and champions-in-the-making, just know when to up the pace when they need to, and from where to draw the energy to do so.

The folks I feel most sorry for are the innocent members of teams that have had to withdraw from the race entirely because one of their team has spoiled it for the rest of them: team Astana, for example, and Cofidis. I think the non-guilty members of the teams should be allowed to carry on.

I think with that strategy, we’d see drugs cleared from the sport in a matter of days!

I’m just delighed that my two favourite riders (for obvious reasons) are still in the race: Vladimir Karpets and Christian Knees.

Vladimir Karpets just has the best name ever! That’s a name that goes off the end of my cool-o-meter. That’s like calling your kid something like Sebastian Fridge-Freezer, or Aubrey Dashboard.

Christian Knees is a name in a league of its own. Other members of that league might be Buddhist Thighs, Satanic Spleen and Taoist Wrists.

Highlights (and low-lights) of the tour continue tonight on ITV4 or online at ITV Cycling.