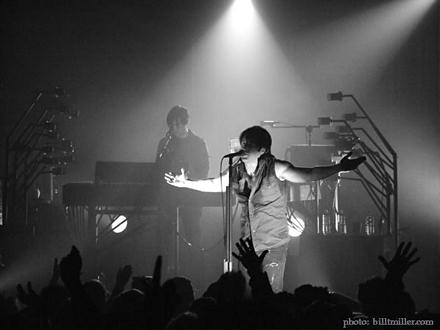 They never understand the loveliness and the beauty of this thing that we call human existence.

Compare this with an interview with Trent Reznor of Nine Inch Nails in the last edition of Terrorizer magazine about their new album Year Zero:

“It’d be ludicrous for me to say, ‘Oh there’s always been a real optimistic side to our music,’ but most of the time, no matter what state of despair or desperation I might be in on the records, there is an element of hope, of salvation being searched for. When I’m onstage reacting to people it certainly doesn’t feel hopeless or hate-filled to me …

Overwhelmingly for me, NIN is always searching for redemption of some sort. There was and is a positive reason for this record to exist. To get people to pay attention, look around themselves in a different way. It’s pretentious, it may not work, but it’s worth a shot. I’m only pissing my own money away!

And I’d hate to look back and just think my music sleepwalked through these years. Year Zero feels like the right thing for me to do right now. It’s the only thing I could’ve done and still been okay with myself.”

A couple of things struck me about these quotations:

You could argue that Reznor is fulfilling an important task of a theologian here: pointing to the BIG questions of life, and encouraging others to join in the debate.

The album Year Zero is rather good too, which is a bonus.