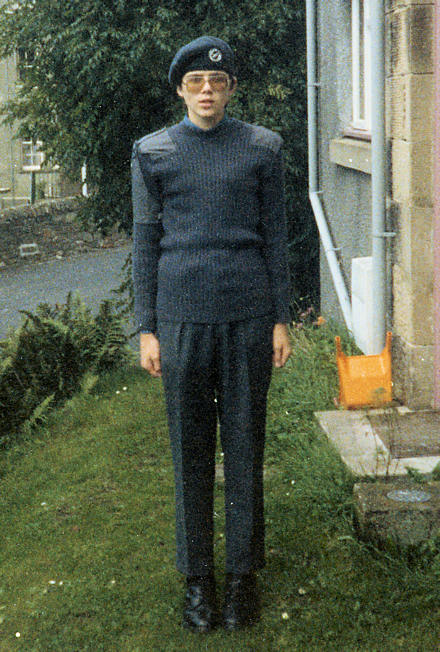 They say that every woman loves a man in uniform. To be honest, I’m not sure you can be entirely accurate with such a sweeping statement!

That’s a photograph of me proudly standing in the garden in my Air Training Corps uniform; I must have been aged about 15, I reckon.

And that’s a little orange wheelbarrow to the right of me, in case you were wondering. It wasn’t standard issue. Sometimes in the thick of pseudo-military situations you just have to improvise.

Which service do you want?

I really wanted to join the Royal Navy Training Corps (if ever there was such a thing), as my grandfather was an engineer in the Royal Navy, but given that Selkirk is about 33 miles from the sea and they couldn’t get a battleship up the River Ettrick (not that I suppose they ever even tried … lazy lot!) I had to make do with either the Air Training Corps (ATC) or Army Cadet Force (affectionately called “Pongos” by the ATC!).

My uncle had been in the ATC; he could fly a plane. That was cool. So I joined the Air Training Corps.

I thought it was classier too. Too many Saturday matinee films on BBC2, I reckon, watching Ginger and Blasher fighting it out amongst the clouds.

The closest I got to flying with the ATC, however, was sweeping out a hanger because our gliding appointment was cancelled due to high winds. We spent the afternoon instead wandering around the National Museum of Scotland on Chambers Street in Edinburgh with members of the public mistaking us for curators.

I had three favourite things in the ATC, apart from dressing up in the uniform, and marching around the local car park:

What more could a teenage boy want?! A girlfriend, I guess … but that’s another story.

One thought on “Men in uniform”