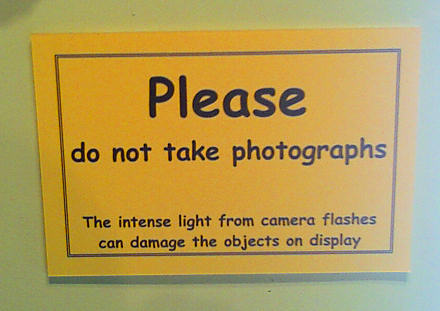 This afternoon Jane, Rich and I had a very successful and educational trip to the Scottish Fisheries Museum. As it says on the sign out front: it’s bigger than it appears.

The place was littered with signs instructing visitors:

Please do not take photographs.
The intense light from camera flashes can damage the objects on display

I obviously flaunted those instructions on the following grounds:

Not my kind of priest 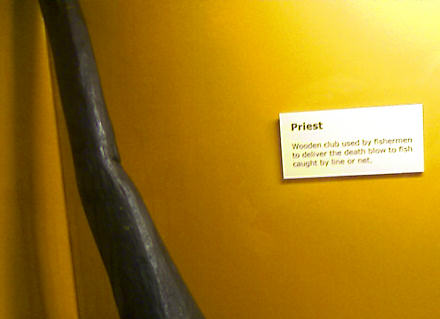 Near the start of the museum tour was a display of early fishing — ‘early’ as in 6,000 BC not 06:00 am. Amongst this display was a black, wooden club called a “priest”. The sign reads

That’s not my idea of priesthood. When Jesus invited his disciples to become fishers of men I’m fairly certain that bludgeoning people into the Kingdom wasn’t at the forefront of his mind.

The museum was fascinating, with loads of very interesting displays, from the earliest signs of fishing in Scotland, through sail boats, steamers and onto modern fishing techniques.

What caught my eye most, however were the dummies, those manufactured figures used to try to bring scenes to life. I couldn’t help but find them incredibly spooky. It would appear that they didn’t buy in ready-made tailor’s dummies. But they made their own, using painted gloves for hands, and quite eccentric masks for faces. Oh my word they really freaked me out, some of them.

I’d hate to be in there overnight when they come alive and move about. I imagine that they might move like the alien in the movie Men in Black: “I put ma hands on ma head!” 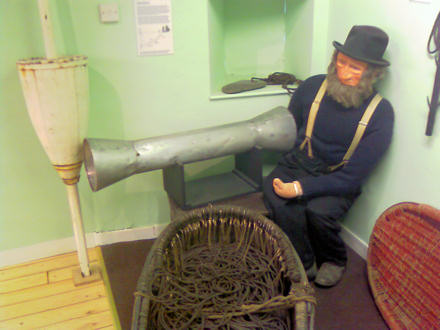 For example, above is a photo of the model of Abraham Lincoln with his arm in a sausage machine. Or something. 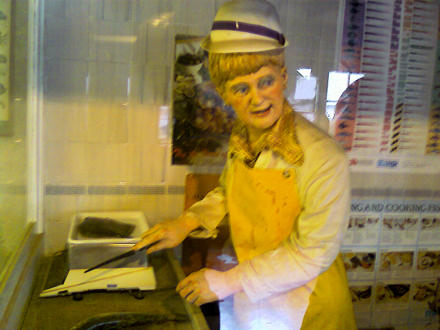 This lady, above, is situated in a mock fishmonger’s shop just before you get to the exit. She looks really sinister holding that knife and looking towards the door. It was the empty, soulless expression in her eyes that made my blood chill!

In the same way that I enjoyed working in the textile mills in Selkirk and Galashiels, because it gave me an appreciation and understanding of my Scottish Borders heritage, this trip has given me something of an insight into the history of this area. 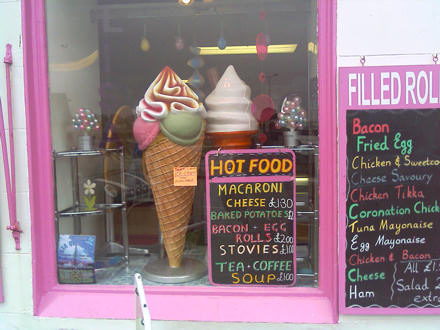 On our way home we passed a shop that had in its window what looked like a giant ice cream wearing a two-tone bikini!