Remember the 24 game that Jane and I play while watching episodes of 24, and remember that Jane was the first to predict the exact times twice in a row? Well, we have a new game …

Don’t get us wrong, we’re still playing the old game, but the new game involves us trying to will our names to appear, spelled exactly right, during the opening credits to an episode of ’24’.

This evening, I’m delighted to report, Jane won. We had just started watching the episode between 09:00 – 10:00 am of Series 3, when the name “Jane Saunders” appeared on the screen: 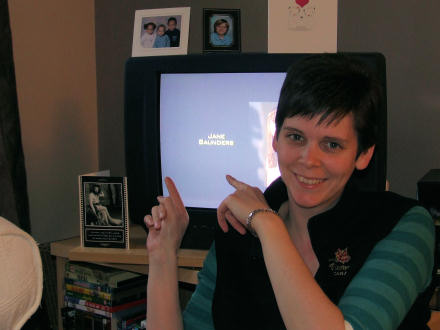 Incredible! Our next ’24’ game will probably require our faces to appear somewhere on screen during an episode, or for our DNA to appear as part of the evidence in a case. I’m still hopeful that I can win …