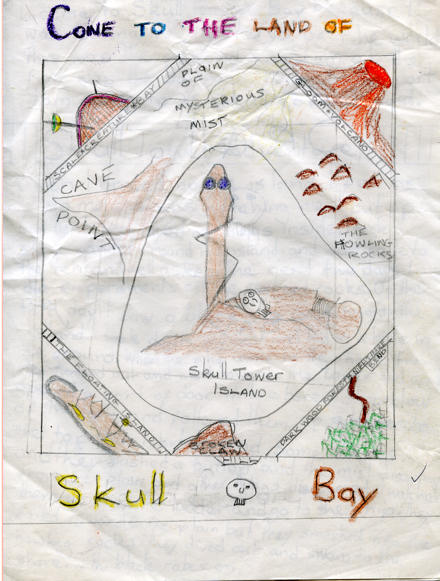 Clearing out stuff at Mum’s the other week I came across this story of mine that I’d written at primary school. I thought I’d share it with you. It’s called “Come to the Land of Skull Bay”.

Before I share the story, I thought I’d make mention of the format that I found this story in. The story was written on the middle pages of a small, four-page booklet with a full-colour, hand-illustrated cover. As you’ll see from the tale, I obviously spent more time on illustrating the front than on developing the plot and storyline, but I think you can see that it was worth it.

I’m reassured that at such an early age I obviously took JRR Tolkien’s advice to heart, that if you want to write a convincing fantasy piece you must start with a map. And what a fine map I produced. From top left, working around clockwise, the locations in the vicinity of “The Land of Skull Bay” are:

I’ve not corrected any of the spelling in retyping this. I think that it gives it an extra layer of authenticity.

I came to Skull Bay because I was touring the mysterys of the world. This was the second one I am at. The first was the Burmuda Triangle. The part I am going to is Skull Tower Island.

When I arrived on the island I felt as if someone was watching me. I put up my tent and layed my things inside. I took a slow wander round the island and went back to the tent and fell asleep.

The next two days I did experaments on the soil and rocks. On the third day I saw a black ship coming towards the island. I took down my tent and hid in a hole in the ground.

When the ship came to the shore two men jumped out and went towards the tower and opened a sort of door with a bone. I slipped out of the hole and followed them up a ladder to the top then I hid behind some crates, and they pushed a button and the mist disappeared from the plain and other things disappeared.

I watched them go down the ladder and go to the ship. They sailed towards the plain but they smashed into the howling rocks. They dived out and swam to the shore, with black robes on.

I pressed a button and the mist appeared.

I ran down the ladder and across to my boat and went to the plain. I soon found the two men on the ground. I pulled back the robe and the man was a skelaton.

The next day I buried the man and went on the third place which was Stonehenge.

I love the ending. You can almost hear the teacher saying, “Right, class! You’ve got five more minutes on your stories, if you could bring them to a close now.”

“Arrgghhh! Panic!” my poor eleven year old brain must have thought. “But we can’t be finished. I’m still only in Act 1, we’ve only just met the protagonist and I’m only now realising the imbalance! What must I do?! … Sod it! I’ll just have to bury him and move on to Stonehenge, … where the demons dwell; where the banshees live and they do live well.

I bet Stephen King never wrote anything is spine-tinglingly harrowing and blood-curdling when he was at primary school! I wouldn’t be surprised if someone from the BBC Drama department writes to me and asks to buy the rights for that story, which I think you’ll find is still copyright me! … or the writers of every Scooby Doo story that has ever been.

In the words of Nick Ross from Crimewatch UK: “Don’t have nightmares!”