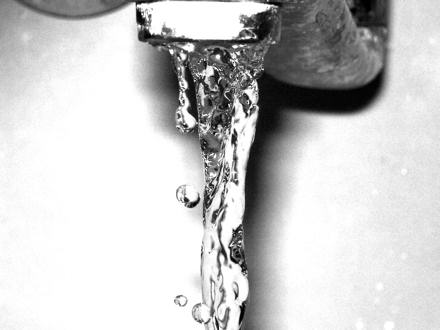 This evening our water went off. Seemingly Scottish Water are doing essential maintenance in the area and the supply will be off from 19:00 this evening until 04:00 tomorrow.

Which is a real shame as I had to cancel the first annual “Anstruther Cleanest Car and Wet T-shirt Competition” that was scheduled for this evening. You should have seen the disappointed looks on everyone’s faces.

Every other time, in every other house I’ve lived in, it’s not mattered that the water has gone off. We just have to be prudent and only use small amounts of water so that the storage tank in the attic doesn’t drain too quickly. I assumed that it would be the same here.

However, this house doesn’t have a water storage tank in the attic. Or water coming out of the taps.

Still, necessity is the mother of invention. I’m off now to have a bath in a cocktail of milk, bubble bath, squash concentrate, the water from vases and vinegar. I bet Jane is glad that she’s staying at her Mum and Dad’s (hydrated) house this evening. 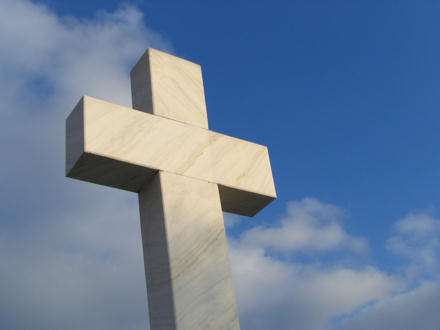 At the weekend my Mum phoned to tell me that my paternal grandmother — whom we called ‘Nana’ — had died. She’d been ill for some time, and it wasn’t entirely unexpected, but the news of the death of a family member is always a sad time. Mum was in tears as she spoke on the telephone.

A conversation at work on Tuesday:

Gareth: My grandmother died at the weekend.

Gareth: Thanks. Do you think I could get off for the funeral?

Colleague: I would imagine so.

I’m not going, of course, but we have been invited to send our condolences via the magic of e-mail. My brother sent me an e-mail which began “Is there anything (appropriate) you would like said at Nana’s funeral?” It’s nice that he felt that he had to qualify it with the word “appropriate”. Actually, knowing me, I’m glad he did.

The thing is, writing something like that is hard at the best of times but I’m finding it all the harder given that I only ever met my Nana on — as far as I can recall — three occasions: once in the late-70s (1978? 1979?) when she came to visit; once at my Dad’s cousin Ruth’s wedding in the early 80s; and the last time was in the mid-80s (1985 or 1986?) not that long after Dad had initially recovered from his triple brain haemorrhage. So the last time I saw her was maybe about 22 years ago.

Nana and her new husband Arthur — my grandfather had died when my Dad was in his late teens or early twenties — moved to New Zealand in October 1971, a month before I was born. They returned to live in England for a couple of years in the early 80s, which was why we could see them at the time of Ruth’s wedding, but decided that the UK was too expensive so moved to Australia to be closer to her other siblings there.

My brother was able to visit her in 1998 when he went to his friend Phil’s wedding. I had hoped to see her in 1992 when the National Youth Choir was touring Oz, but last minute plans meant that we didn’t go near Melbourne or Victoria, which would have made such a meeting possible.

So, what to write …? She was my father’s mother, my grandmother, and as such I loved her, it’s just I wish I’d got the chance to know her a bit more. May light perpetual shine upon you Nana. I hope you and Dad are having a party! 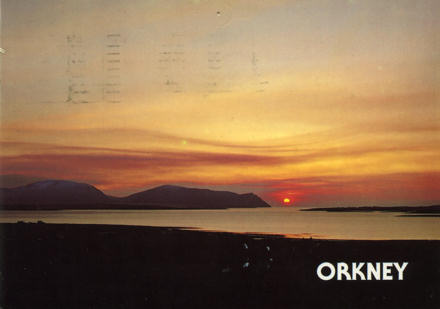 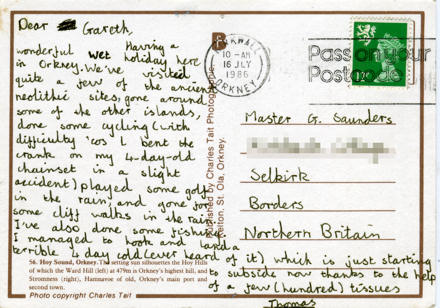 Back in the day, I had friends who sent me postcards. These days they either e-mail, send an expensive text, or we just chat as usual via Windows Live Messenger (formerly MSN Messenger). This week’s archive postcard is from Chomas, a friend of mine from school days.

Before you read the text of the postcard, you may be interested to know that Tom was the chap that I ran over on my bike somewhere between Arisaig and Mallaig. It was his fault, he’d clumsily hit a “passing place” on the single-track road while looking at his chainset. It was making a funny noise, seemingly. But not as funny a noise as him hitting a hillock at 20 mph, coming off his bike and landing on the road right in front of me.

What could I do? I hit him, of course!

To cut a long story short, his brother delivered a replacement bike that evening and took me home, with big holes in my hands, knees and hips. It was like stigmata but in the wrong places and less holy.

I’ve a feeling that this was a holiday he took shortly after that dramatic tour; I may be completely wrong.

Having a wonderful wet holiday here in Orkney. We’ve visited quite a few of the ancient neolithic sites, gone around some of the other islands, done some cycling (with difficulty ‘cos I bent the crank on my 4-day-old chainset in a slight accident) played some golf in the rain, and gone for some cliff walks in the rain.

I’ve also done some fishing. I managed to hook and land myself a terrible 4 day cold (ever heard of it) which is just starting to subside now thanks to the help of a few (hundred) tissues.

What I think he meant was: wish you were here!