Yesterday I arrived home to discover that I had a parcel. Technically, it’s probably more a “packet” than a “parcel” but hey! Anyway, here it is:

What could it be?

As I’d ordered a few geeky accessories for my new phone on the internet I wondered if it could be one of those. Maybe it’s my 2GB micro-SD card, or the O2 Xda Orbit cover (made from 100% real ‘something’) or …

I couldn’t stand it any longer. I took it through to my desk, ripped it open and looked inside: 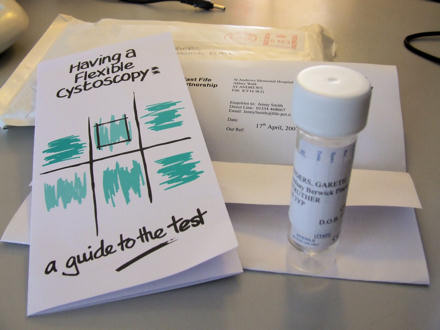 Imagine my disappointment when I discovered that it contained three things, none of which I’d ordered on the World Wide Web:

Oh, how I’m now looking forward to Tuesday morning at 09:00. (Irony!) Isn’t modern medicine marvellous that they can do such things. (Fact!)

Still, hopefully they’ll be able to find out why I’ve had so many UTIs over the last couple of months, and why I’m still experiencing some discomfort after four weeks of antibiotics.

As it turns out, there were three other parcels delivered yesterday for me too. One was delivered to number 39: it was a new Sony DVD+RW drive to replace the one that I hadn’t actually broken — I’ll tell you that story later; the next was shoved through the cat flap: it was my Swedish Xda case; and the last was delivered with my parcel of doom in the conventional way (through the letter box) and was my 2GB micro-SD card.

All’s well that end’s well, as they say.

But then I bet the person that said that didn’t have the prospect of having a camera shoved up them!