For some time my friend Mike has been requesting a photograph on my blog of me when I had long hair. I had long hair on two occasions during my life.

The first time was around 1990 during my first year at the University of St Andrews; a fine academic institution, if I may say so. Sadly, my barber at the time didn’t understand the concept of REAL METAL™ and I ended up with a mullet. Which I’m sure will please Simon. 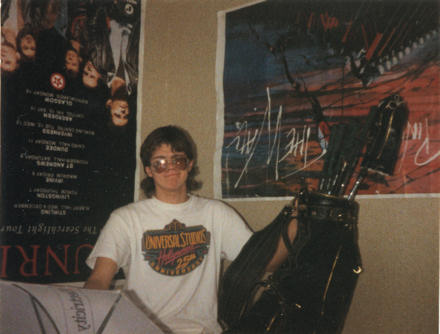 Here I am sitting in my neighbour’s room at Donaldson 10, David Russell Hall (of fond memory). The photo was taken by Angus Chapman shortly after we turned everything in his room upside down. Oh what japes! 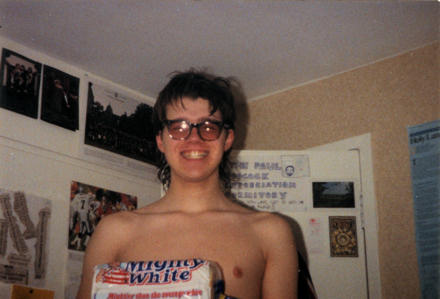 This photo was taken by either Peter Leeming or Ian Rankine (not that one), in my room (Donaldson 9, DRH) of me in my NHS specs, and holding a loaf of Mighty White.

The second was between 1995-1996, while working for the Shaftesbury Society in London. But then everyone had long hair: me, Andy, Dave, Wes.

And oddly, I don’t have any photos of me during this period — could anyone help out here? My camera was stolen in 1994 before I moved to London and I didn’t buy another until I was living there, and had been shorn.

I’d always promised my Mum’s hairdresser that I’d let her cut my long hair. So I travelled back to Selkirk, had my hair cut and returned to London with my long, black student overcoat.

I walked into my flat and was greeted by my flatmate Jonny about to thump me: he didn’t recognise me!