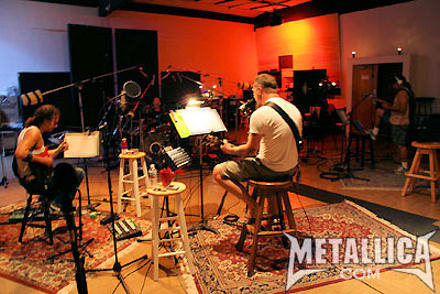 Great news! Metallica are back in the studio recording their ninth (original) studio album.

Here’s what it says at Metallica.com, for those of you too lazy to check it out:

Metallica left the comfort of HQ this week to descend upon the greater Los Angeles area to begin recording their 9th original album.

This is the first time they’ve recorded outside of the Bay Area since they spent an eternity at One-On-One Studios recording The Black Album in ’90 and ’91.

The last couple days have been devoted to each band member working out the right sounds, including Lars who remembered to turn on the snare and Kirk who played a solo!