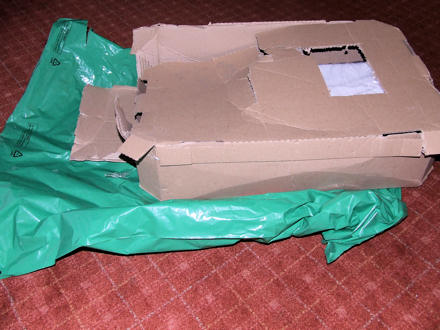 In last place this week, and not strictly a utility company, are Home Delivery Network Limited who delivered my replacement laserjet toner cartridge from Dabs.com.

The package arrived on Wednesday morning in a bright green bag. Inside was a box: a crushed box. A very crushed box. Almost open, in fact. And with a large footprint on the top of it.

Edward de Bono in his book How to Have a Beautiful Mind suggests that trying to explore possible alternative explanations for a particular situation is an attractive quality.

The easy thing would be to get upset about this and blame the laziness or clumsiness of a parcel handler. But maybe there is another explanation about why my box got crushed and ended up with a boot print on it.

Maybe the delivery van driver had stopped to drop off another parcel. There he was in the back of the van, trying to extract a particularly bulky box — maybe it was a bicycle for little Johnny’s birthday, or a giant tea cup for eccentric Uncle Quentin’s garden display.

Then all of a sudden the van suffers an almighty shudder. It’s a bear. A big grizzly bear has just attacked his van mistaking it for a giant bee hive. The van driver yelps in fear. He maybe even swears a little. I don’t know; I couldn’t hear him above the roar of the bear.

The door swings open and the bear appears. There is now nothing between the frightened driver and the bear. The bear swings his enormous paw. The driver takes a step back, stands on my laserjet toner box, and slips just in time to see the bear’s paw pass overhead.

Had he not stepped on my box he might have been crushed by the mighty fist of the grizzy bear. My laserjet toner box pushes against two boxes, which fall from the van. The first spills open; it’s a box-full of honey-flavoured ice popsicles which distracts the bear long enough to allow the driver to make his get away.

That’s what I think happened. The second box, by the way, contained a complete collection of back issues of The Oldie, which didn’t interest the bear in the slightest.

Credit where it is due: after my two months of almost tireless complaining about intermittent broadband connections, my connection has now been up without interruption for 10 days now. So my number two place this month goes to BT Group, formerly known as British Telecom.

It took a while to get there, nagging and nagging about it via telephone calls and firmly-worded e-mails, but it would appear that BT have now successfully fixed whatever problem there was at our local exchange. Thank you, thank you, thank you.

One of the main reasons for going to BT in the first place was that they own and maintain the infrastructure. Or as Wikipedia puts it:

So if there is a problem with the exchange then it’s BT that deals with it, regardless of which ISP you might be with. So I wanted to be as close to the folks who deal with the communications infrastructure as I could, even if it meant paying that little bit extra.

As it is the package I’m on has already come down in price since we joined in April 2006 and the imposed download limit has now been withdrawn completely and we are free to enjoy unlimited usage. Meaning that I could download the entire internet if I wanted. I’d zip it, of course, to save space on my hard drive! 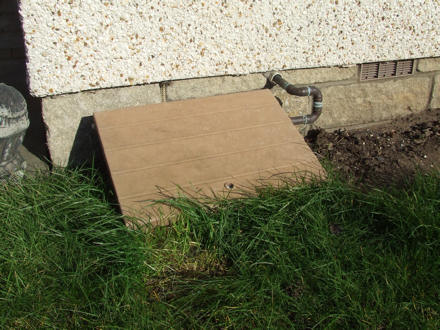 However, it’s Scotia Gas Networks who are my number one utility company this month.

Shortly after moving in to the house in November I discovered that the gas meter box lock was broken, meaning that potentially anyone could switch off the gas supply to our house. Which, I’m sure you’ll agree, isn’t terribly festive.

I e-mailed my friend Roger the other day for advice. He works for … I’m sure you can guess.

Roger replied on Tuesday, and I sent a photo of the box by return e-mail. This evening I returned home to a new gas box lid and a key posted through the letter box. Yay!