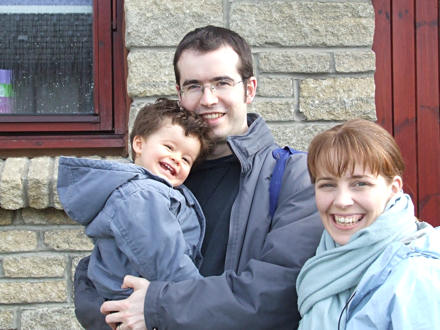 My brother Eddie, his wife Rebecca and their son Owen, taken in Anstruther last Saturday.

Reasons I’ve not blogged much this week:

On Friday my brother Eddie, his wife Rebecca and the ever-cheerful Owen stayed overnight. That’s them in the photo at the top of this post. It was a lovely, last-minute decision. Their stay, I mean, not the photo.

We watched a DVD that Eddie gave Rebecca for Valentine’s Day.

It was the first time that they had watched it too.

The film was about a man who was dying, the name of the film (21 Grams) is how much weight you lose when you die, and — predictably — it wasn’t the slightest bit romantic. Or funny.

And appears to have been compiled almost entirely from trailers about the film. By a monkey. It is somewhat disjointed. And we were somewhat over-tired.

(I secretly really enjoyed it, but don’t tell the others.)

Mind you, I gave Jane Lord of War for Christmas, so I’m no better. 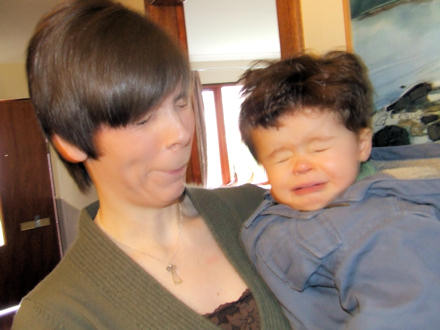 Is Owen sneezing or upset?

We entertained friends from Edinburgh for lunch — splendid soup, wonderful company. Then watched 24 for the rest of the day.

In the evening we watched 24 and Top Gear.

But it’s all good: I’m still loving my job, and Jane and Jesus. Probably in reverse order.

2 thoughts on “The three ‘J’s in reverse order”