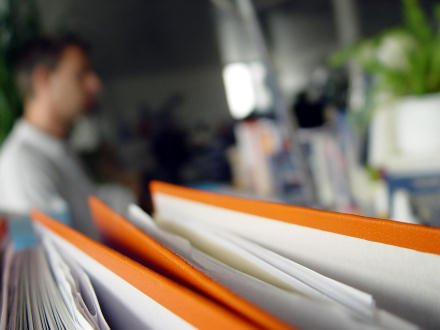 I love being organized. In fact I’m one of the most organized people I know. How do I know that? Well, of course, I have a graph with a list of “people I know” along the x-axis and “how organized they are” along the y-axis.

I’m kidding. But I quite like that idea. Give me a moment while I type that into my To Do list in Microsoft Outlook.

I’ve written before about how wonderfully helpful I’ve found Sally McGhee’s excellent book Take Back Your Life. She helped take my almost-there system and with a few key twists turned it into something that is incredibly effective. So that I can now manage and track all my projects and tasks with Outlook and my Psion PDA.

Last night I couldn’t get to sleep, there was too much stuff going around my head. Mostly things to remember to do. So I got up, found my Psion and returned to bed to “download my head”. In other words, I wrote down all the things my poor brain was trying to remember; I typed them into my Psion’s Agenda task list which this morning was synchronized with Outlook. I wasn’t surprised to find that I had 25 things that I was wasting brain power trying to remember.

One of those tasks was this:

Once in Outlook I then move them into a category according to where I would need to perform that task. This is what David Allen, author of Getting Things Done, calls “contexts”. My categories/contexts are:

From there I can then schedule them into my calendar, which transforms each task from being simply “something to do at some point” to being “something that will get done at a particular time”.

This week I’ve discovered a couple of sites that are dedicated to productivity:

The 43 Folders podcasts are particularly good; I’ve listened to them to and from work these last few days. 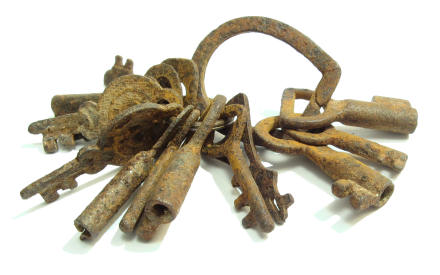 Today I did something that I’ve been keen to do since mid-November: I handed back the keys to 3a Toft Terrace, the rental property we moved into when we first moved to the East Neuk in April 2006.

At long last the letting agent have found a new tenant, which means that we’re now freed from the ‘luxury’ of paying £600+ per month renting and heating a flat in which we are no longer living. (We had a fixed-term lease which wouldn’t expire until April 2007, unless someone else took on the tenancy.) This has been a real answer to prayer, praise God!

I took this telephone call yesterday morning at work:

Woman: Hello, Mr Saunders, this is [insert name] at Rollo Davidson McFarlane in St Andrews. I’m just calling to say that we’ve cancelled the two viewings you had booked this evening, because … we have a new tenant for the property.

Woman: Yes, so if you could please hand back the keys on or before 8 February.

So soon! How marvellous. There was much celebration when I hung up from that telephone conversation; some of it with Jane on instant messenger.

I have to say, I quite like it this way. 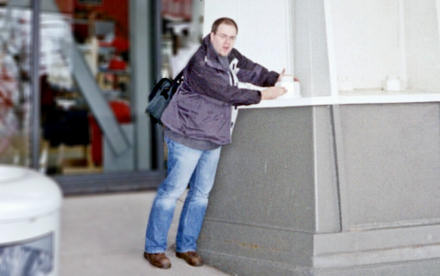 Gareth holding a giant nut at the foot of the Seattle Space Needle in 2004.

I’m still here, don’t worry. I took a look at my blog this morning and was surprised to see that I’ve not written anything since Tuesday. There is a reason.

Actually there are quite a few reasons, one of which is simply that I’ve been busy with Other Things™:

At the beginning of the week I began to feel mildly unwell, experiencing amongst other symptoms a dull pain in my groin. I simply assumed that I’d ‘caught myself’ while cycling at the weekend.

By Wednesday I was beginning to feel particularly groggy and was finding it difficult to concentrate. “I’m just over-tired,” I thought to myself.

On Thursday I stayed at home to concentrate on some HTML coding without the office distractions getting in the way. At lunchtime I thought it might be prudent to make an appointment with the GP, just in case I got worse. The soonest they could see me was Tuesday lunchtime.

My stay-at-home-to-work strategy worked particularly well, except that I’d worked solidly all day and hadn’t really got anywhere: my code still wouldn’t work and I was beginning to find it really hard to concentrate. By 4:00 pm I had confined myself to bed as I was sweating and shaking quite dramatically.

“Hmm,” I thought to myself, “I suspect that I’m fighting an infection.” The dull pain in my groin was turning into quite a sharp pain by this point and Jane prescribed me a dose of Nurofen with paracetamol. I slept off the shakes, the painkillers reduced the pain and swelling and we went out to dinner.

On Friday I felt even more muddled and called the GP. They could see me at 14:50.

At 15:45, after a fifty-five minutes wait, I was seen by a doctor who confirmed that I had epididymitis: a bacterial infection of the epididymis. Which in layman’s terms means this: I have an infection that makes me feel as though I’ve been given a mighty kick in the nuts!

It’s seemingly not the most common of conditions, but the presence of a kidney condition makes it more likely that I contract this ailment. Which might explain why this is the fourth time I’ve had it in five years. Because of the kidney disease and we’re on the IVF waiting list it was especially important that I got it seen to and was put on antibiotics as early as possible.

Three days and four pills (Ciprofloxacin (500mg) – one to be taken twice each day) later and the pain is now beginning to subside, my head is becoming less foggy and I can concentrate on finally getting my HTML/CSS code to work properly.