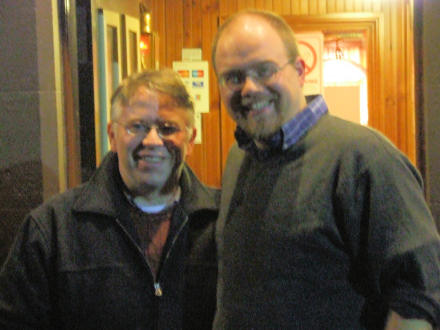 Oochi-ka-papa Man and his sidekick Gareth about to tackle some crimes.

This afternoon I’d arranged to meet up with one of my best friends from university days: The Rev Ian Rankine and The Revd Maureen Paterson and their two lovely boys Gregor and Angus. They live near New York. In America. On the other side of the planet. And they don’t get out much.

They were due to arrive at ours at 17:00. I got home early and waited.

And waited a bit more.

And then went out to look for them. With binoculars and a flare gun. And everything™!

At about 18:30 we checked the telephone answering service (Call Minder, on 1571) and discovered a message from Ian (left at 14:23) to say that the boys were sick and they would have to cancel.

I felt gutted. I was so looking forward to seeing my old room mate again.

“I’m so sorry,” said Ian on the answering message, “but we will be back over in the next year or two, hopefully we can see you then.”

That’s ridiculous, I thought, they are only staying about a 30 minutes drive down the road, in Coaltown of Balgonie, near Glenrothes.

So I called Ian, and two hours later we were sitting in the lovely surroundings of The Balgonie Arms public house on Main Street sipping beverages and catching up.

Much fun, much laughter and in the company of one of my dearest, dearest friends. And Jane.

That last sentence was, of course, for comic effect. I said to Jane in the car on the way back that it was a lovely way to spend this evening, in the company of two of my closest friends. I guess the next time we see Ian (and hopefully Maureen too) will have to be in the States. We’ll get saving now.

*Oochi-ka-papa Man was the name that Ian gave himself in the strange language that we (but mostly he) made up. It’s his superhero name, apparently. Chinkapap is another word he invented. It means “goodbye”.