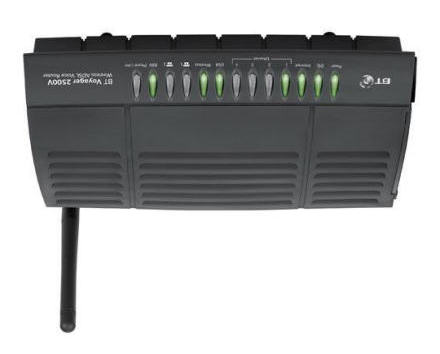 The good news is that BT technical support telephoned me when they said they would. The bad news is that I missed Ross Noble Live on Radio 4 as a result of the call. Oh yeah, and I still have a broadband connection problem.

Here’s what happened. I received the call from someone from BT support, I didn’t catch her name, she sounded Indian, was very well spoken, polite and courteous. After the initial introductions she got down to business.

Customer Support #1: Are you still experiencing the same problem of an intermittent broadband connection?

Customer Support #1: I have an e-mail here from you to say that you followed all our instructions and you are still experiencing the same problem.

At which point I’m thinking, well if you know that already why did you ask me?

Customer Support #1: Now, can you tell me, does the power light stay on when you have this problem?

Customer Support #1: Can you please take a look and tell me.

Gareth: Well, not really because the problem is intermittent. Sometimes it drops the connection every two minutes, other times it’s up for 3 hours before it happens, and it is on just now so I can’t tell you.

Then she went through each of the points on their original e-mail once more just to make sure that I wasn’t a complete numpty who couldn’t read English or be bothered to actually try anything that they’d suggested.

Customer Support #1: So did you try it with a different microfilter? … blah blah blah … changed cables … blah blah blah … offered a sacrifice to Mercury the god of communication … tried the test socket on the master phone socket?

Customer Support #1: So your router is now currently plugged into the test socket, is it?

Gareth: No. Oh, sorry I didn’t realise that it had to be plugged into the test socket.

Customer Support #1: That’s ok Mr Sanders (sic). If you could please plug it into the test socket now. I’ll hold while you do this.

And that’s where the real fun began.

Our master socket is in the hallway, so assured that my nice Indian customer service lady would hold while I moved camp to the hallway, Jane gathered up the Voyager 2500V, power and DSL cables, while I set to work spilling the entire contents of the shredder beneath Jane’s desk on the way to unplugging the microfilter.

Seconds later we were in the hallway. I plugged in the cables, Jane plugged in the power cable and switched it on. As it began the boot-up sequence I picked up the wireless phone.

And then I realised that I’d unplugged the base unit from the microfilter, so the phone cable was sitting on the study floor and not actually connected to the phone line at all.

A few seconds later I was on my hands and knees once again beneath Jane’s desk plugging in the second microfilter and the phone’s base station.

I phoned our phone with Jane’s mobile. It rang. Only it didn’t ring, if you understand me. It was ringing in the earpiece of Jane’s phone, but the actual telephone on the desk in front of me wasn’t ringing.

My second epiphany of the evening. Remember that thing I said about when you remove the master socket’s face plate it disconnects the satellite phones? Yeah! …

When the customer service lady rang back I was sitting comfortably in the middle of the hallway with an old school, wired phone plugged into the microfilter that was hanging out of the test socket.

Customer Support #1: Hello Mr Sanders (sic) well, it would appear that you’ve carried out our instructions but are still experiencing the same problem.

Yes! YES! I’d noticed that too. Which was why once I’d tried what they’d suggested I’d e-mailed them back to tell them that. Clearly this was the kind of bad news that they needed to hear for themselves.

Customer Support #1: I’m going to pass you on to our Faults Deptartment, if you could please hold.

I continued to hold.

Customer Support #1: Thank you for holding. I’ve managed to speak with someone from our Fault Department …

Gareth: Great! (Thinks: what with that being what you set out to do.)

Customer Support #1: I’m going to pass you on to him now.

And do you know what? I had to go through the same thing all over again, at the end of which I was told that he’d have to pass the matter on to the telephone exchange who could test the line and call me back within 24-48 hours.

Twenty five minutes to answer the same questions that I’d been e-mailed and had replied to, passed on to two people in two different departments only to be told that neither of them could help me. I’d have to be passed on to the Wizard of Oz himself who lives in another department. But at least I’d managed to pass the test and be granted an audience with him and his magic line-testing equipment.