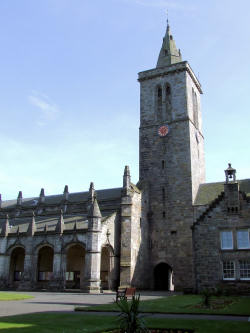 On Sunday morning I preached at the Chapel of St Salvator’s College, University of St Andrews, for the first time. (What I mean is that was the first time that I preached there and not the first time I’ve ever preached, as someone thought I meant when I told them the other day.)

I really enjoyed the experience, even though while in the pulpit standing opposite and preaching to one of my former New Testament lecturers, who knows the passage I was preaching on from 1 Corinthians in far more detail than I do! Just before the sermon, as the preceding hymn was coming to an end I reminded myself that this wasn’t an academic lecture it was a sermon of faith. And in good faith I preached this sermon.

Finally, exasperated the students asked, “Rabbi, tell us then, how do you know when the night has ended and the day is about to begin?” The Rabbi looked at each of them in turn and said “It is when you can look upon the face of any man, woman or child and see there a brother or a sister. Because if you cannot do that, no matter what time of day it is, it is still night.”

A powerful story, and one that helps us to realise that we still live in that night of alienation, in which we do not always see God’s beloved children as our brothers and sisters, but a world of ‘us’ and ‘them’.
In a week where accusations of racism within the Celebrity Big Brother house hit the news headlines and about which questions were raised in Parliament.

This week our troops will have spent 200 weeks in Iraq, 276 in Afghanistan. And the killing continues.

Just now, many parts of the Christian community , particularly within the community to which I belong: the Anglican Communion, are taking sides against one another: conservative vs liberal.

Or simply spend five minutes browsing the BBC News website for more stories about how we human beings fail to recognise that the person next to us is our brother or sister.

Jesus shows me another way. A way that forces me to err on the side of love and inclusion, than stigma, rejection and victimization.

Jesus Himself was the pure victim, and by the very nature of his experience on the cross has shown that God will always side with the victim in any situation. “The powerless sufferer, whether ‘innocent’ or ‘guilty’, is the one who belongs with God, simply in virtue of being a victim”, writes Rowan Williams (Resurrection, 2002).

Remember that passage in Mark (chapter 9) where the apostles tell Jesus that they had stopped a man from casting out demons in Jesus’ name because he was not a member of their group. “He was not following us,” they said, emphatically.
Whom do we regard as ‘in’ or ‘out’; who is in our group and who is not?

Like the disciples, we are sure that we can spot those who are not like us, and who are not with us.

Throughout history a lot of terrible things have been done in the name of Jesus Christ.

We have used our own selfish agendas to smear the name of the one who loved the marginalized, who embraced the lepers, and brought back to life those whom everyone else had written off as dead.
So many people harmed or destroyed, supposedly in the name of the one whose life was to bring together all people in love.

How did the Christian community end up like this? What have we done to the message that Jesus lived out? We categorize the world. We make our assumptions. We determine what is right. And decide whether someone is for us or against us.
Even after all these years, how can we still believe that a ‘good’ Christian is only the one who looks and sounds like us, who believes exactly what we believe, or worships exactly how we want to worship?

It is astonishing: what has changed in 2,000 years? We still live out our lives in a fragile peace.

In the reading from 1 Corinthians 12 we hear St Paul urging the Church in Corinth to stop excluding people and be less competitive.

Corinth was an important Roman colony, a place of trade and of fierce competition (the Corinthian Games were second only to the Olympics). Corinth itself was a dark place, that seems to have had an almost ‘anything goes’ culture: if it feels good then do it!

It was a hard place to be different in, a hard place to live out the Gospel in. It was difficult to not bring the attitudes of the surrounding culture into the Church. But that’s exactly what happened.

Factions had developed, morals were in disrepair, and worship had degenerated into a selfish grabbing for the supernatural. Spiritual gifts, such as Speaking in Tongues were exalted and practised in the congregation.

But it wasn’t that these gifts were being used that Paul objected, it was that when they were being exercised those that used them had the attitude of “Check me out! Look how cool and important I am!”

Paul’s response to the Corinthians is a wonderful pastoral response: affectionate, firm, clear and unswerving in his conviction that God among them-revealed in Jesus and present in his Holy Spirit-continues to be central in their lives, regardless of how much of a mess they have made of things.

St Paul takes them by the hand and goes over old ground, directing them in how to work the details of God’s saving love into their love for one another.

One is not more important than the other; they are all equally important, bringing their own unique gifts to Christ for use within the Christian community and the world at large.

We are all members of one body within the Church, regardless of the human boundaries, barriers and categories that we put up to contain and control our faith.

Jesus doesn’t see them. Jew, Greek, Christian, Muslim, black, white, straight, gay: it doesn’t matter, we are all God’s children, we are all loved by God who desires the best for us, who desires that our unique gifts are developed and used to His glory.

How many times do we do that? How many times do we exclude others or dismiss them because their opinion, their viewpoint about Jesus differs from ours. We trivialise those who are not with us whether it be politically, theologically, sexually or socially. “They don’t matter!”, we say. “It doesn’t matter if we lose them, the Christian community would be better without them.” We treat them like an appendix or tonsils removed from the body.

We, like to think of ourselves as modern, enlightened, educated Christians, and yet we still exclude those with whom we disagree. Which makes us no different to those first century followers of Christ. We too judge who may be allowed to do mighty works in Jesus’s name.

The Good News is that it is not about us. It’s not about what we want, or prefer, or feel happier with. It’s about Jesus.
It is about the divine love of Christ living in us and through us; Jesus Christ, who does not reject those whom society excludes.

Penniless, homeless Jesus, a wandering carpenter who speaks of diversity, inclusion and respect to those people who have never known it. The God who appears amongst us exactly where He is least expected to be; the God of Surprises. The God of Love also speaks to those who oppress. Jesus adopted the outcast members of society and brought them into his household. That is what we are also called to do. We are called to serve.

Jesus unrolled the scroll and found the place where it was written: ‘The Spirit of the Lord us upon me, because he has anointed me to bring good news to the poor. He has sent me to proclaim release to the captives and recovery of sight to the blind, to let the oppressed go free, To proclaim the year of the Lord’s favour.’

That is the life that we are called to as Christians.

When it comes to Christian dogma and doctrine, Jesus is the one who sets by example. It is just that simple. We are called to serve. Not judge: serve.

It is not up to us to make those holy judgements-who amongst us could cast the first stone? Christ’s message for us is to offer sanctuary and peace in a violent and threatened world. We must let the Spirit of Peace itself be allowed to live inside of us.

In this post-Christian world we must ‘make room’ for all of God’s children. The Church-the Body of Christ-needs to rediscover that this is a place where sacred hospitality is offered.

A place where we learn together what it means to be broken, and healed.
A place where our fortunes are shared.
A place of reconciliation, and not division or bickering.
A place of Shalom (Peace) and not disharmony.
A place where the living Lord Jesus Christ is met in each one of us; when you look into the eyes of the person sitting next to you, you see the face of Christ.

As we look upon the face of any man, woman or child and see there a brother or a sister, then truly, truly, morning will have broken.

Following the sermon I had been asked by the chaplain to announce the next hymn. I was quite amazed when I saw what it was, bearing in mind that I had no idea of any of the hymns when I wrote my sermon.

Amazing! Isn’t God good. The service ended with this blessing:

One thought on “My sermon from Sunday”