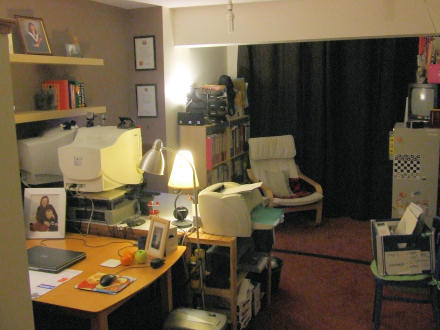 This evening Jane and I have been busy putting up curtains in the study (big brown cloth things in the photo above) and affixing two Ikea Lack shelves on the study wall (the big, wooden long things to the left of the picture above).

We did it ourselves.

Update: I’ve just realised that this is my 1000th post! 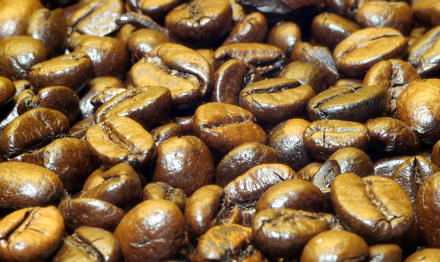 Yesterday we were visited at work by someone from Nedstat, a company that specializes in Web statistics. But that’s not what this post is about, it’s about this: why my browsers were falling down whenever I ran Java applications; a problem I’ve had for over five months now.

Because whenever the Nedstat rep. tried to run a Java-related online application in Firefox it wouldn’t work as expected.

Him: Hmmm… it’s not supposed to do that.
Me: Is it Java, by any chance?
Him: Yes, why?
Me: I’m having trouble with Java and my browsers just now.

It’s a guaranteed way to scupper software reps’ demonstrations though, if that’s your thing: make sure your browsers don’t work properly. (Not to be recommended.)

At the university we have a staff expenses online form which runs within a browsers and uses Java and an Oracle JInitiator plugin to run. (Don’t worry if you don’t know what these mean, it just means that you need X to run Y.)

Only, whenever I tried to run the application in either Firefox or Internet Explorer 7 the browsers would crash. With Firefox I was getting the following error message:

It worked fine in Opera though, which made me wonder if this was more to do with the browser configurations rather than a strictly Java-related problem. So last night I stayed on after 5pm to sort it out.

Having uninstalled all the Java Runtime Environment-related applications, rebooted and installed the latest JRE I turned my attention to the browsers and disabled all my Firefox add-ins (formerly known as extensions).

And do you know what? That fixed it. There was obviously an add-in that was interfering with the functionality of Java. But which one?

It turned out that two Firefox add-ins were to blame: IE Tab and JSView.

Similarly, with IE7 I’d been playing around with Add-ons shortly after I’d upgraded to it from IE6. Obviously something was impeding the functionality of Java within the browser so I clicked the Reset button (found in Tools > Internet Options > Advanced tab) which returned everything to a default, untampered state.