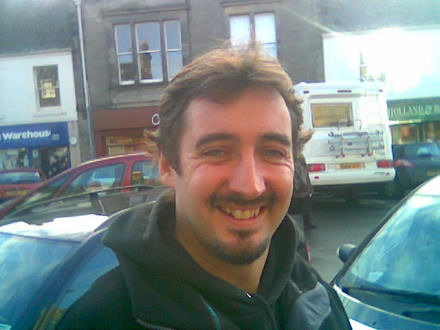 The one and only Philip Z. Graham on Market Street, St Andrews.

In the last 30 days there have been three searches for “Philip Graham” on my blog. I know this because I have the Search Meter WordPress plugin activated on my blog. Who am I to deny my readers from what they are wanting?

Phil is a friend of mine from my school days in Selkirk. We also spent the same four years in St Andrews, while I studied Divinity he was across the road studying Mediaeval History. Phil then stayed on in St Andrews for a few years making picture frames before jetting off to Japan to teach English, where he’s been ever since.

Until last year I’d only seen him, I think, once since we graduated. That once was in a pub in Hawick where Phil revealed that he had obtained the qualifications to be able to perform western-style weddings (by which I mean western European rather than Wild West cowboys) in Japan. I won’t go into the details about how he acquired these qualifications, suffice to say that I seem to recall that it involved a BBQ. (Phil please correct me if I’m wrong!)

So there I was on Monday 18 December sitting at my desk working on a presentation for the following day when all of a sudden, like the shopkeeper in Mr Benn (but not dressed like the shopkeeper in Mr Benn) Phil appeared at the window. He’d been visiting a friend in the library and knew that I was working in the (no sniggers please) Butts Wynd area.

It was really great to see him again. We went to Macgregors for coffee/hot chocolate and chatted about the last ten years, about his time in St Andrews and Japan, and mine in stipendiary ministry and out.

And then we said goodbye. No! Not like that! We just shook hands. And that’s when I took the photo on my Nokia mobile phone.

Leave a Reply to the Chef Cancel reply