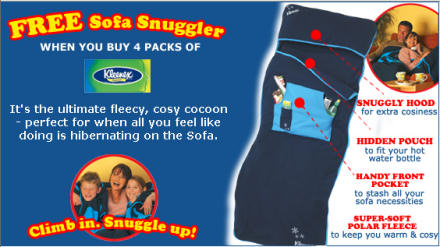 Kleenex have a competition advertised on selected boxes of tissues at the moment to win a Red Nose Day inflatable chair. All you have to do is text in the correct answer. So on a whim I did.

It’s not that I have a particular desire to win an inflatable Red Nose Day chair, or really anywhere that I want to put one should I win one. We’ve just decorated the public rooms and none of them are red. But it was a competition and I never win competitions so I thought I’d give it a go. I could always give it to someone who needed an inflatable chair to sit in their bright red room.

I sent the text and continued with my end-of-year festivities and general cheer-making. And about an hour later, to my surprise, I received a text back to say that I’d won and that someone representing Kleenex would be in touch within a week to arrange delivery of my new, just-won inflatable chair. Woo hoo!

But nobody did. I just assumed that they were on a long New Year holiday; probably testing out the inflatable chairs of winners just like me.

And then midway through this week someone called me on my mobile phone to say that while Kleenex had told me that I was a winner actually I wasn’t. The competition didn’t start until 1 January 2007 and I’d sent my entry in on 31 December 2006. D’oh! I’d been about six hours too early with my entry.

Kleenex representative: Yeah, sorry about that. We were testing our automated reply machine that day.

Me: So I’m not a winner after all?

Kleenex representative: Well, we were wondering if you would be happy if we sent you a Kleenex Sofa Snuggler instead of a giant, red inflatable chair?

And thought “What the heck is a Kleenex Sofa Snuggler?! … who cares? I’m a winner!”