Iain and Lisa settle into a natural and relaxed game of Yahtzee.

Jane and I enjoyed a splendid and festive late afternoon and evening at the artists formerly known as our neighbours on Toft Terrace, for Christmas-y snacks, Yuletide drinks and fun games; that’s a recipe for 100% F.U.N.

We kicked off proceedings with Pit, a fast-paced card came that appears to involve more shouting than outright skill.

This was followed by Atmosfear, a spooky board game from the early 1990s that includes a VHS video cassette that must be played while the game is playing. The video counts up towards 60 minutes when the game must end. Every now and then the Gatekeeper appears suddenly on the screen and shouts at you. “STOP! … you Maggots!” Sounding just like Monkey, Sandy or Pigsy from the classic 1970s TV show Monkey. He then gives you a challenge, or releases those trapped in the black holes, or just randomly shouts at you.

I suspect that the actor who played the Gatekeeper was probably told that his performance was suitably fearsome. I’m not sure it was. To me he appeared to be more in the vein of a voice-over actor who’d spent his time dubbing oriental movies on days off from intense psychiatric therapy. Atomosfear? Care in the Community – Video Edition more like. (Remarkably this game is still being sold, only now in DVD format!)

We ended with a round of the classic dice game Yahtzee. Where Yvonne scored no fewer than FOUR Yahtzees (that’s when all five dice show the same number within three rolls). 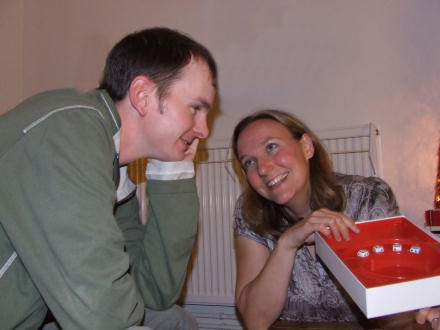 Yvonne’s husband Ian delighted in his wife’s achievements each time she scored Yahtzee.

I found a clip of the Gatekeeper on YouTube.