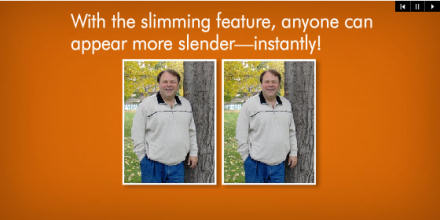 In a week where it was reported that experts writing in the British Medical Journal want overweight clothes shoppers to be given an obesity helpline number at the checkout, unhealthy foods to be taxed and school leavers given a health check maybe Hewlett-Packard have come up with the perfect solution: a camera that makes you look slimmer.

So rather than being confronted at the checkout by a waif-like, spotty, emo teenager behind the till telling you that you’re a fat, lazy, lardy-arsed heart-attack candidate who should be spending his money on a gym lesson rather than on a jumper that looks like the Millennium Dome they would rather that you simply pretended that you are slim by digitally manipulating photographs of yourself.

Doctor: Now Mr Jones I’m quite concerned about your weight, you’ve put on 12 lbs since your last visit. On Tuesday.

Mr Jones: No, it’s alright, look at these photographs of me. They were taken only yesterday. I look slim and svelte.

Doctor: My word, so you do! Sorry about that, it must be my glasses. I’m due for an eye test next week anyway. My apologies. Well … there’s nothing wrong with you. No need to make another appointment.

Mr Jones: That’s great news! And on my birthday too.

Doctor: Oh congratulations! Are you doing anything to celebrate?

Mr Jones: I’m having an all-day party. At McDonalds.

The Doctor begins to look worried.

Mr Jones: Oh, don’t worry: I will be taking my camera.

As someone who sadly is somewhat overweight I’m really not convinced that that is the right solution. I think they should market it as “The Slimming Camera — the camera that does lie!”