We had an amazing worship experience at Powerpoint — a monthly Christian youth event overseen by SU Scotland — in Edinburgh last night, after only a couple of hours of rehearsals.

God really blessed us and the 400+ who turned up for an evening of Christian worship, teaching and games. One girl even held her birthday party at Powerpoint last night — now there is Christian witness for you; how wonderful! Here are a few photographs from the evening, ably taken by my brother Eddie. 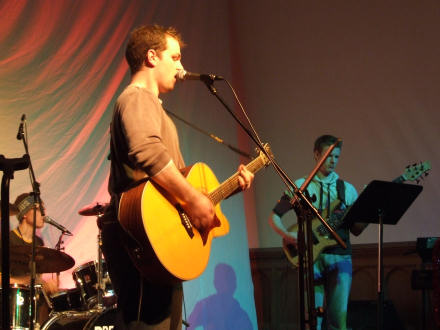 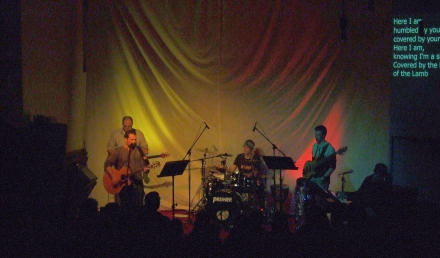 Photograph of the Powerpoint band, taken from the balcony. As well as Neil, Andrew and Mike are me on electric guitar and Timmy Cocking on keyboards. 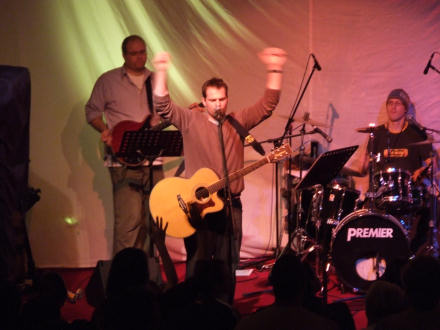 “Hands up if you love Jesus (and are currently not playing an instrument)!” 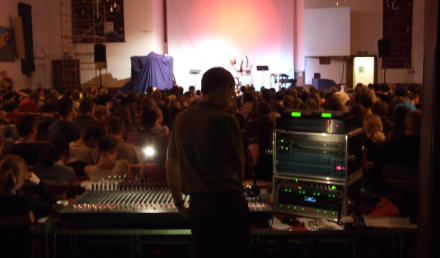 The man who actually makes us sound more than half decent is our resident wonder at the mixing desk and the sixth member of the band: the legend that is Richard Mitchell.

Just as last year we played a handful of Christmas carols including the wonderful O Come, all ye faithful. Here is the descant written in TAB for all you guitarists out there. 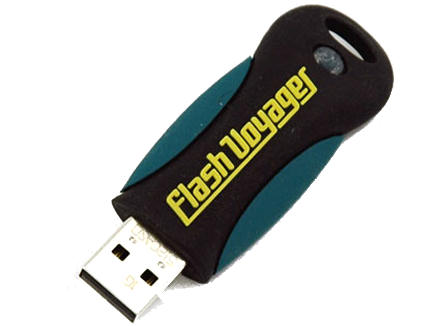 A couple of months ago my Corsair Flash Voyager 1GB memory stick started playing up.

For no apparent reason, and at completely random moments when plugged into a USB port it would spontaneously disengage itself from the system and then moments later would re-engage. As I’m running Windows XP this would result every few minutes in my speakers emitting the “boo-boop” sound and a pop-up message appearing in the notification area alerting me to the fact that a piece of hardware had left the building.

As you might imagine having any piece of hardware that appears to be suffering from ADHD could quickly become somewhat annoying. So I contacted Corsair by e-mail. They live on the other side of the planet so it took a wee while for them to wake up, boot up their PCs, check their e-mail and reply — probably over a cup of coffee (that’s the kind of cool guys I think they are) — with an RMA number: a magic code that tells them that this is a piece of equipment that they are expecting back.

I’d chosen the Corsair Flash Voyager memory stick/flash drive after reading a very positive review in PC Plus magazine which gave it the coveted “Editor’s Choice” award partly for being quite clearly the fastest memory stick tested. That it is also protected in a rubber coating and features a user-friendly light indicating drive use was an attractive bonus.

In the Christmas 2006 issue of PC Plus Corsair once again pick up the “Editor’s Choice” award and a “Hot List” award for their latest offering of the Flash Voyager, an 8GB model for £118, which scored 4.5 out of 5. Eight gigs of flash memory?! That’s almost two DVDs-worth of data on a stick about the size of your thumb. (If you have small thumbs — or gigantic thumbs, for that matter — then please read that last sentence as “… on a stick about the size of Gareth’s thumb.”)

A few weeks pass — probably enough time for a small parcel to travel across the globe from the Royal and Ancient town of St Andrews to somewhere in sunny California and another package to make the return journey — and I now have my replacement Corsair Flash Voyager drive which works perfectly.

Yet another example of perfect customer service: no fuss, no unnecessary questions, no bureaucracy, they simply received their faulty product back and returned to me a working product. Well done Corsair!