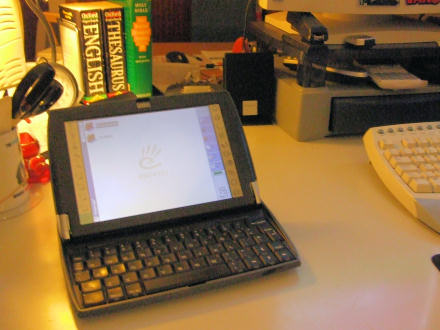 This morning I took delivery of my Psion Series 7Book, returning as it did from POS Ltd in London almost two months after I sent it for repair. It seems traditional in some quarters at such times as these to complain bitterly about such poor service and vow never to use them again. But you know, it just wasn’t like that.

I’ve used POS on a number of occasions mostly for repairs and occasionally to buy reconditioned machines and accessories and each time I’ve found them to be excellent, on average taking about three days to receive my machine, fix it and return it to me as good as new. So this recent repair was a little under par for them.

The problem was that I’d damaged the screen in a little sitting-my-Psion-under-an-open-window-during-a-storm accident. I sent the Psion to POS who repaired the screen forthwith, my insurance company happily obliged with paying for the repair (minus a fifty quid excess) and all was well.

The screen failed the test. Indeed, from what I gather from a useful conversation with Gareth at POS, all their screens failed testing. So it was off to Germany for a new batch of screens. And Germany isn’t very close. Disappointing of course, but I had my Psion Series 5mx as a spare (also repaired by POS a few years back!).

What made it all the more bearable, however, was that I had people at the end of the phone to whom I could easily chat about what was going on. Gareth and Delroy at POS were great: approachable, friendly and very helpful. They understood that I wanted my Psion back as soon as possible and to be fair they did everything that they could to do so … just as soon as the new batch of screens came in, which was understandably beyond their control.

My only criticism is that it would have been nice if, once they knew of the delay, they had contacted me rather than my having to phone them every four weeks to get an update. But when I did call they were understanding, courteous, attentive and most importantly honestly told me what was going on. I really appreciated that. I felt valued.

When I spoke with Gareth early last week he said that they were expecting the new batch to come in later that day and he promised that I’d get my Psion back by the end of the week. And I would have had I actually had the decency to be in mid-morning on Friday, rather than selfishly being at work. Hence the P739 and this morning’s visit to the sorting office.

And now I have it back in my grasp. And it’s looking good as new: new screen, new casing, new keyboard. And they threw in two new backup batteries for the trouble. Not exactly a bargain repair at £250 but given that I use my Psion every day there was no option but to have it repaired. And in my opinion POS are the best.

So thank you POS once again for great service, a first class repair and for being a thoroughly professional and friendly company. It makes such a difference from many of the faceless, impersonal PC companies I’ve had to deal with through the years. Keep up the good work.