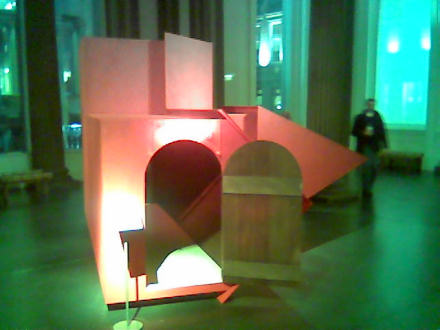 Yesterday afternoon, before seeing MotÃ¶rhead, I caught up with my friend Simon Varwell in Glasgow. Cos that’s what you do exactly seven days before moving house: you travel 100 miles to meet up with friends when you should be packing!

Walking from a trendy cafÃ© in the Merchant City towards … somewhere (I don’t know Glasgow very well) we passed a number of equally trendy clothes and shoes shops including one called Cruise. Not to be confused with Cruse, the national bereavement counselling service. Unless they are indeed linked, and Cruise only sells black outfits.

Hey, my dad may have died, but damn it! don’t I look the business!

Not far from there we stood outside the Gallery of Modern Art and admired the statue of the Duke of Wellington, with a traffic cone on his head. (You can see a photograph of it at Wikipedia, I was delighted to discover this evening!)

We didn’t stand outside for very long. The gallery is free, so we went in. My two favourite pieces were a pair of giant dogs (fashioned from resin and fibreglass) which appeared to be guarding a wooden church building that looked like it had fallen over. That’s what the photograph above is of. I stood back and looked at it for a moment.

“That looks like what would happen if two Monopoly hotels mated and gave birth to a church!”

It was one of those interactive art exhibits. There was a bright neon sign above the door that read “Welcome” (an idea perhaps for our local congregations?). Inside, in the spire (how inspiring!), there was a video being played on a television monitor. It showed a naked man sitting with his back to the camera, in what looked like a church building, singing hymns, unaccompanied. Maybe the idea was that we accompany him.

We were invited to sit in there and watch the video. I graciously declined. I’ve had to deal with enough naked, hymn singing men sitting in faux church spires to last me a lifetime. But it was kind to offer.