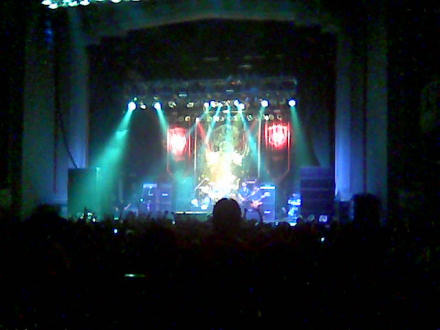 So, last night Mhairi and I went to see Motörhead (remember to pronounce it correctly, with the umlaut: Mot-eu-r head) at the Carling Academy in Glasgow thanks to a pair of tickets kindly gifted to us as a Join Me Random Act of Kindess by an anonymous donor. Who could it be? Who could it Bee? (… and thank you!)

Having first gone for a totally rock ‘n roll pizza at The Hut, opposite Central Station, we arrived at the venue in the middle of the first support act’s set. There was a glowing neon sign to the left of the stage that read “Ladies”. I wasn’t quite sure whether this was a indication of the location of the toilets or a reminder that this evening’s first band were indeed all of the female variety.

I didn’t catch the name of the band, the lead singer may have said it a couple of times but she shouted it in a most unlady-like fashion. I imagine, however, that it was called “Metal-by-Numbers”. Anyway, they were quite good, in a late-80s, Doro Pesch kind of a way. If there was ever a need for an all female Judas Priest style band then I’m sure they’d be in the running.

The next band up in our evening of driving rock were Maryland rockers Clutch. We stood by the mixing desk chatting while their gear was set up on stage. And then what looked like six accountants walked on stage and started playing. Ah, that’ll be Clutch then. The brakes were off and we were motoring towards … I think I’ll stop the bad engine parts puns now. And if they were accountants then this would probably be their day off as they were looking a little unshaven and unkempt. But boy did they rock?

For the first couple of songs I wasn’t quite sure what genre of metal they were sitting in: hardcore? blues-based? southern stoner rock? all of the above? Clutch sound like a cross between Led Zeppelin and AC/DC with Henry Rollins on vocals, who have been listening to too much Corrosion of Conformity, Down and New York Hardcore.

They use a lot of unusual time signatures and synchopated back beats (I just added that bit to make me sound like a proper music journalist!) and their drummer is fantastic. Playing what looked a drum kit that he won in a Christmas cracker he demonstrated admirably that it’s not what you’ve got it’s the way that you use it. I’m sure that he ought to have been awarded either a diagnosis of ADHD or an ASBO!

Clutch were everything that a support act should be, playing to a loyal MotÃ¶rhead crowd and ably and quickly winning them over, introducing the audience to another quality rock band. I’ll most definitely be looking out for their albums the next time I’m shopping for music.

What can you say about Motörhead that hasn’t already been said? Motörhead were once considered to be the house band at London’s glamerous Ritz Hotel. Drummer Mickey Dee was once an astronaut with NASA. Guitarist and residential Welshman Phil Campbell has a guitar made entirely from money. Those things, of course, are not true, but they’ve probably not already been said. You read it here first!

Every time I’ve seen Motörhead in concert (this was my third concert, making Motörhead the band I’ve seen live most — other than the National Youth Choir of Great Britain!) Lemmy has wandered onto stage and announced

Last night was no exception. And they did just that. Loudly. A mix of old and new, with a healthy helping from their latest album Kiss of Death Motörhead played for nearly two hours. Although, surprisingly, it wasn’t as loud as I’ve heard them before — last night everything definitely wasn’t louder than everything else. But then I had my earplugs in, so I guess it didn’t matter that much.

Other highlights and surreal moments included:

The gig ended with a three-song encore: the all-acoustic “Whorehouse Blues” (with drummer Mickey Dee on guitar and Lemmy on vocals and rock harp), the obligatory “Ace of Spades” and lastly “Overkill” during which the lighting guy used nothing but strobe lights for the entire song — overkill indeed.

As we emerged from the Carling Academy back onto the street I quickly donned my 100% rock ‘n roll lambswool jumper, scarf and jacket and removed my ear plugs.

Glasgow is a long way from Anstruther, and Harthill Services is a long way from Glasgow when you’re busting for a pee! I got home, sustained by a couple of Cadbury Boost bars and bottles of Fanta orange at 01:40. But what a rocktastic night!