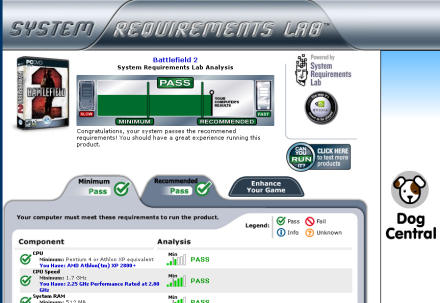 Here’s a really useful online application from the guys at System Requirements Lab: it’s called Can You Run It?

As the name may suggest, this is an application that runs via your browser and using either a helping of ActiveX or Java magic (depending on your browser of choice) quizes your PC’s system requirements and lets you know whether your particular box of plastic, metal and silicon can run the game that you’ve selected from a drop-down menu at the start of the test.

For example, it informs me quite reliably that I can run Battlefield 2, Star Wars Battlefront and Lego Star Wars on my home PC (which I already know, because I do) but not on my laptop.

It even goes a little further than simply saying “The computer says No!” by identifying exactly what part of your hardware is letting you down. In the case of my laptop the graphics card scores reasonably on everything apart from Video Hardware Transform & Lighting, my puny Intel 900 (915GM/GMS,910GML) graphics chipset just isn’t up to the task, poor thing.

Guess I’ll just have to settle for chess, mahjong and solitaire while on the go rather than anything more vioilent or sci-fi. Which, I suppose, is probably for the better.