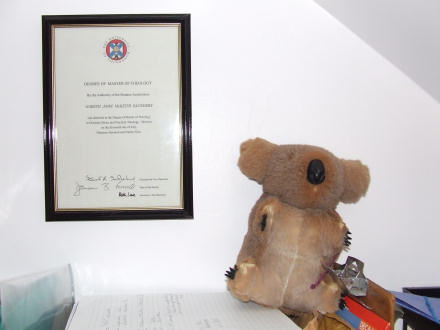 When I was a child I thought like a child, which is probably why I found that this koala that was gifted to me by my grandmother in Australia really freaked the living daylights out of me.

You see my koala was once a real koala. And I don’t mean this in the slightly jokey, childish understand that of course all my cuddly toys were real. This one wasn’t cuddly, it really was an ex-koala. A hard, stuffed real koala with fake, plastic claws, nose and eyes.

What a perfect gift for a child?!

I never knew what to do with him. (I always assumed it was a boy koala — I could be wrong.) He would sit on my bed during the day, and lie on the floor at night. I couldn’t cuddle him, he was too hard, his plastic claws too sharp, and his fake nose too cold. And he smelled a bit. Oh yeah, that and HE USED TO BE A REAL KOALA!!!

That’s what freaked me out the most. What if the ghost of the koala came to haunt me? What if… actually I didn’t really care “what if…” — he used to be a real flippin’ koala bear, that’s surely enough to freak a kid out. Dead things, as I understood it, should be buried. You die, you get buried, job done. You don’t get them stuffed! Ancient Egypt, as far as I was concerned, was just an experiment that went wrong. A giant game of hide ‘n’ seek that got a little out of hand.

Only I don’t think that they actually stuffed the pharaohs, but you know what I mean. Once they’re dead, why not just leave them that way? We didn’t stuff or mummify my Dad when he died in 1998. And you know, somehow I’ve never really regretted that decision.

Which was a shame, because I wanted to love my little koala. Like I said, he’d been a gift from my grandmother (she prefered the term “Nana” as it didn’t make her sound as old) and I so wanted to have some fond connection with my Dad’s mum, who lived on the other side of the world.

We once tried to dig a hole in the garden to try and reach her in Australia, but when it started to get colder and the evening drew in we lost interest and went in for tea and a bath. The hole didn’t go to waste, though. We used it to bury the cat. Which, incidentally, we didn’t get stuffed first!

A month or two ago Mum was clearing out the toy cupboard and somehow I ended up bringing the koala home with me. So now I have the koala again. His current hiding position is wedged behind a lamp on the top of my bookcase. I’d moved him from being a doorstop because I think he was freaking out our cats.

I kind of feel sorry for him.

I’m off to wash my hands now.