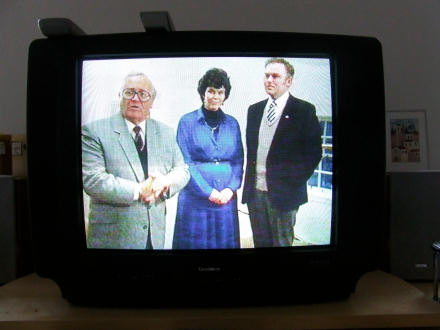 A couple of weeks ago I was sorting out our videos in preparation for moving and came across the video tape with the recorded show on it. I popped it into the video player and turned the TV on.

SIR HARRY SECOMBE: With me are Keith and Rosalie Sanders (sic) from the town of Selkirk. They have three children and have been practising Christians for most of their lives. More than most people they have every reason to feel the nearness of God. Now, the story starts with you Keith, doesnt it. So what happened?

KEITH SAUNDERS: In 1983 I had a fairly successful career in the electronics industry as a Capital Planning Engineer. I was touring the UK delivering the Faraday Lecture. At the seventh venue I was actually undertaking an interview, a television interview, when suddenly I collapsed with a sub-arachnoid haemorrhage.

What is tremendous about a man collapsing on TV having a sub-arachnoid brain haemorrhage? It’s not as though simply having a brain haemorrhage was enough for Sir Harry to label this as a “tremendous” event in the life of my father, because he clearly knew what happened next. Here’s what he said:

SIR HARRY SECOMBE: That’s tremendous! So that paralysed you all down one side?

KEITH SAUNDERS: I was paralysed down my left side, that’s correct.

See! He knew that the brain haemorrhage had paralyzed my dad down his left side. Actually it appears he didn’t care what side it was. Down “one side” he’d said, obviously pleased that his enthusiastic “that’s tremendous!” comment had gone down so well and hadn’t been challenged in the slightest. Neither had his mispronunciation of our surname.

I might have been outraged at Sir Harry’s “tremendous” comment had I not been laughing so much.

The Oxford Pocket Dictionary defines the word “tremendous” as:

Most people that I know, however, use the word “tremendous” to mean “excellent” rather than “awe-inspiring” or “overpowering”. Which is why I heard the conversation go something like:

KEITH SAUNDERS: At the seventh venue I was actually undertaking an interview, a television interview, when suddenly I collapsed with a sub-arachnoid haemorrhage.

Which is clearly not what he meant.

Actually, as I recall, Mum and Dad really enjoyed the day. Dad especially was delighted to meet one of his comedy heroes, Sir Neddie Seagoon, and asked about his Goon days. Dad came back the evening of the shooting saying that he’d ‘thrown’ a couple of Goons lines at Sir Harry who immediately threw back the correct responses. For example,

DAD: Gad! The head of a skull.
SIR HARRY: Must be a woman, the mouth’s still open.

Ah… seems you could still get away with such sexist humour in the late 80s. That’s tremendous!