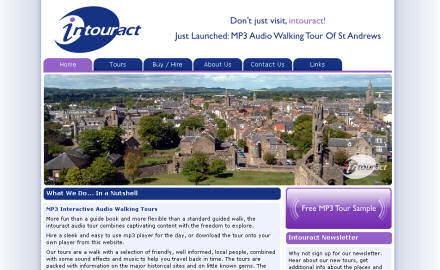 A couple of months ago, in June, my neighbours and friends Ian and Yvonne McKie launched a new venture in St Andrews: Intouract – MP3 Audio Walking Tours.

The idea is a simple one: hire a pre-recorded MP3 player at the St Andrews Tourist Information Centre (other outlets are available) or buy the download online and upload it to your own MP3 player (or portable CD player) and then armed with a tour map of St Andrews set out on a guided tour of the town.

You should now be standing next to the Parish Church of the Holy Trinity. Although it lacks the splendour and immediate signs of a long and important past that other monuments in St Andrews possess, this is one of the oldest and most historically significant locations in the town.

There has been a parish church on this site since 1412, and before that, from 1144 the Holy Trinity Church was the community parish church, based in a smaller building close to the Cathedral. The only complete part of the present building that dates from 1412 is the tower.

The most dramatic and historically significant occasion ever to occur in this church, and one of the most historic occasions in the history of the town, was the Sermon of John Knox on 11 June 1559.

Now, for those of you who go to church and occasionally complain when the sermon seems to last forever think yourselves lucky. John Knoxâ€™s sermon lasted, on and off, for 3 days! Let’s listen in…

Ian and Yvonne have been great friends almost since we bought our wee cottage Kadesh in Cellardyke, and in April when we moved to Cellardyke from Edinburgh Ian invited me to be involved in the Intouract project as one of the tour guides. So during a couple of lunchtimes instead of sitting munching my sandwiches while catching up with friends’ blogs and the latest technological news — which is what I normally do — I sat in the University of St Andrews‘ Alternative Format Suite with Ian McKie recording my parts of the tour.

You should now be inside St Mary’s College, with the dominating Holm Oak tree before you. Feel free to pause this act to read the information board on the left hand side of the entrance, then press play to resume.

The University is the oldest in Scotland and is only predated in the UK by some of the colleges of Oxford and Cambridge. Its origins lie in 1410, when Archbishop Henry Wardlaw made a formal move towards securing university status for St Andrews. The formal status, like most things at that time, was granted by the Roman Catholic Church. It is strange to think that it was upon the authority of a Cardinal in Aragon, Spain, that the university was officially ratified…

It’s a great tour, well researched and involving a good number of locals telling some of the most interesting tales of the colourful characters from St Andrews’ rich history.

I was pleased to discover that having spent four years in St Andrews as an undergraduate I’d picked up quite lot about the history of St Andrews, its buildings, streets and personalities. But I was even more delighted while reading through the tour script to learn much more. For example, did you know that while St Salvator’s Chapel was built around 1450 the rest of the Quad was built almost 400 years later, with the east wing being built around 1830 and the north wing (incorporating Lower and Upper College Halls) built in 1846?

The full tour lasts around 90 minutes, although shorter routes are also available to suit your time schedule.

There’s a free MP3 demo on the Intouract website — see if you work out which voice is mine.

Why not buy and download the MP3? It’s only £5.00 for 29 MB — that’s even better than iTunes … and much more educational! Or then next time you are in St Andrews pop into the Tourist Information Centre on Market Street and pick up a tour (£5.99 for the first MP3 player and £3.99 for each addditonal one hired).