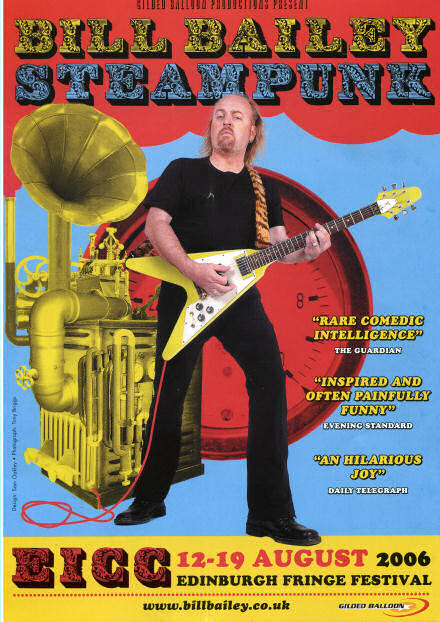 On Saturday night Jane and I got last-minute tickets (from a friend-of-a-friend) to Bill Bailey‘s Edinburgh Fringe show Steampunk.

Sadly, it being the Fringe, the show only lasted for a few minutes over sixty before we were ushered out so that EICC staff could make ready the theatre for Jimmy Carr’s sixty-minutes performance. But not before we had heartily laughed our metaphorical socks off.

The highlight of the show for me, besides his musical gags, was a short piece about postmodernity which ended with him demonstrating Wittgenstein’s critique of the postmodern attempt to discover one’s true identity by first rejecting all previous attempts at defining one’s identity, in terms of a hobbit wedding:

The show ended with Bailey’s tribute to German band Kraftwerk: a Kraftwerk-style rendition of “the Hokey Kokey”, entitled “Das Hokey Kokey”. You could see it coming, right from the start of the show, as the lyrics are printed on the back page of the programme. But that didn’t distract from its comic genius.

On the way into Edinburgh I read in Saturday’s The Scotsman an interview with Bill Bailey in which he talked about a recent 10-week stint in New York. His experience of working in a country where he is less well known, he said, changed the way that he approached performing.

Anyone who’s seen him live before, or on telly, will know that he tends to start his stand-up shows fairly slowly. He’ll wander on and mutter and mummble for a bit…

…before suddenly launching into some completely left-field topic and off he goes; Eddie Izzard does something similar. But New York, it seems, taught him the need to come out and hit the ground running.

But what I liked most about the article was Bailey’s comment on what comedy is about, and about language play, and the beauty of language, and how language can be used efficiently and simply to encapsulate an idea.

While he was [in New York], Bailey got slightly homesick and bought Elvis Costello’s When I Was Cruel, along with a Beth Orton CD.

“I think what I craved was Britishness. I bought those albums for a bit of British moaning. It’s comforting.”

A big fan of Costello myself, I’ve noticed he’s popular among Bailey’s peers, notably Phill Jupitus and Jo Brand. Is the appeal his extraordinary use of language?

“Language is a big part of it,” Bailey agrees, ‘because it seems like poetry set to music and I think that’s what most stand-ups aspire to, to use the language in a way that’s condensed or twisted or personalised in a way that it’s elevated above speech. It’s what you aim for. And that unique voice It’s also the way he manages to crystallise an idea-in a song, which is what a joke aims to do, to sum up a whole subject That’s the duty of a comic, to do that, and you should try to apply that to all subjects.”