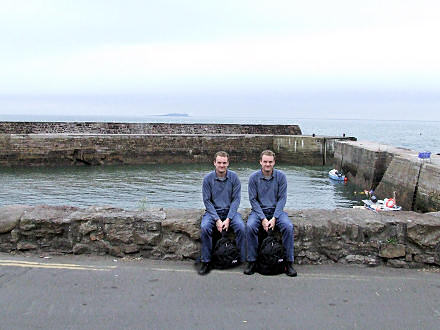 Wendy and Mike sitting at Cellardyke harbour. (Wendy forbade me from posting a photo of her on my blog, so I’ve just cloned Mike where Wendy was sitting.)

Alright, maybe I wasn’t back for all that long! I now have a back-log of all the blog posts that I want to make, but just in case you were wondering where I’ve been…

Having slept for most of Sunday, Monday morning saw me up bright and early and driving down the A915, A92 and A90 to Edinburgh Town to meet up with exNYCgb friend Mike Jeremiah. We met up on Hanover Street and saw Kockov’s Free Mind Show, which was hilarious. I then kidnapped Mike and fellow exNYCer Wendy Nieper and drove them back to Cellardyke to stay at Kadesh overnight. Fine chat, fish and chips and a wonderful evening with friends.

I fancied a change on Tuesday morning, but alas! I was back in the car and driving back to Edinburgh before I knew what had happened to me! I didn’t want to subject Mike and Wendy to the unpredictabilities of public transport. And to be fair, by the time that I’d driven them to the nearest railway station I would almost be in Edinburgh anyway! So I drove in, dropped them at Bristo Square, turned around and drove back to Cellardyke.

Guess where I drove to on Wednesday? That’s right: Edinburgh. You know, I should probably just move there! At 14:00 I had a meeting at the Christian Fellowship of Healing to discuss redesigning their website. At 14:30 I arrived, having been caught up behind a Mr Magoo Fan Club driving tour of Fife!

And today, well today I sat in front of the telly while reinstalling Windows XP Home edition on my Mum’s PC. (After I’d backed it up to DVD, installed a new 40GB hard drive, and remembered which end of an IDE cable is “Master” and which is “Slave”.)

There really is some rubbish on daytime television, I can tell you! I switched off Richard and Judy when Richard was interviewing someone whose son will be one year old tomorrow. “Happy Birthday,” said the guest to the camera. Richard snorted, “Surely he can’t understand you!” “Idiot!!” said I, and switched off.

I watched two films, too: Snatch and Star Wars Episode III: The Revenge of the Sith, caught up with what’s going on in The O.C., Friends (even though they are repeats, and I’ve seen them all before), Neighbours, Holly Oaks, Holby City and Big Brother.

My word, what a dull day I’ve had! The highlight of the day was going to the Co-op and trying to decide on whether to buy the blue fabric softener or the green one. I really need to get out more … maybe tomorrow I’ll drive to Edinburgh.

Why not? I’m going there on Saturday too!