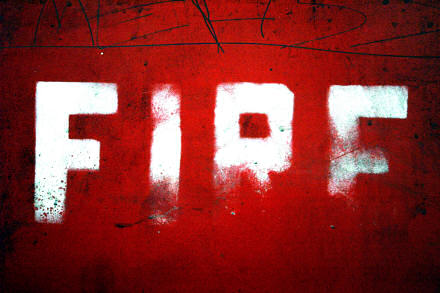 That’s the note that Jane has just posted through the holiday cottage letter box. It says, roughly, in Spanish something akin to:

Hello, the water leak is fixed, but now the gas fire has been condemned, but don’t worry you still have hot water. Have a nice day.

Something like that. We asked the kind Mr Babelfish to do the translation so we might actually have put UK-Spanish relations back a few years.

Anyway, it’s a long story that began with a small drip in the middle of the kitchen ceiling, and ended with Jane waiting in for THIRTEEN HOURS for the Scottish Gas engineer to visit to fix it. Eventually one did arrive, who was great and very apologetic. And bless him he looked as exhausted as I felt.

It took him about five minutes to fix the leaking radiator at the top of the stairs, and another 45 minutes to condemn the gas fire and back-boiler in the kitchen! Thankfully there is an immersion heater. One of those evangelical ones: full immersion, I believe.

Anyhow, it has all been made safe now, in our little money pit next door. Please pray — not sure about what, but I kind of feel the need for prayers just now. There is a lot going on just now. Thanks.

3 thoughts on “It started with a drip…”