This afternoon I gave my PC a minor upgrade, having been meaning to do it for ages. Gone is my faithful 2.4x (speed) Pioneer DVD ReWriter, now replaced with a much faster 16x NEC Dual-Layer; and similarly, my 5-port Belkin USB 1.1 hub has been replaced with a stackable 7-port model, also by Belkin.

This left me no excuse but to perform a quick (long-needed) backup of My Documents, which took a spritely 5 minutes instead of nearly half-an-hour per disc. Have you backed-up recently?

The DVD ReWriter is being donated to my Mum’s PC, which I’m currently rebuilding (new case, DVD-RW, new 40GB HDD to supplement the 20GB model already there, Windows XP Home), and the USB hub … well, I’m not sure quite yet. It’s been relegated to the Big Boy’s Box of Interesting Things™ under my desk, until I have decided.

After I’ve got my book chapters safely posted to Hodder, and have returned from the SEC youth camp in August, I have a new Seagate 300 GB hard drive to install in this (my main) machine. It will replace one of my current 120 GB drives.

But that will involve a complete system backup and long needed reinstallation of Windows XP Professional. 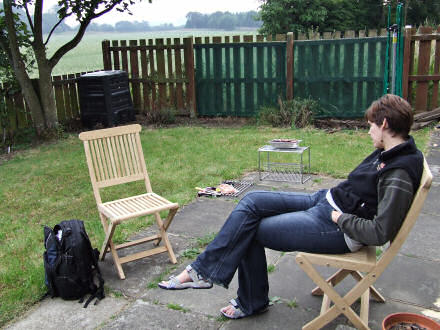 Jane enjoying the BBQ held in her honour, having returned safely from Canada.

This past week has been a great one in terms of catching up with various friends and family, culminating with Jane arriving back safely from Canada yesterday afternoon, her plane having been delayed for an hour at Gatwick due to a thunder and lightning storm over Manchester.

On Tuesday my Mum visited, which was lovely. It was good to show her where I am living and working now, but even nicer just to spend some time with her. It’s one thing to speak on the phone for an hour every couple of days, but so much nicer to be there in person. I love my Mum.

After work I took Mum out for dinner. “Where would you like to go?” I asked.

“Anything but seafood,” said Mum.

So we went to Littlejohn’s restaurant on Market Street, which has a wide variety of dishes. Mum had the haddock and salmon timbale!

On Wednesday evening I had a visit from Roger Bennett who got in touch last year about a Psion-related problem that I was able to help him with.

We’ve kept in touch ever since (hello Roger!), and it was great to be able to meet up at last. I helped Roger move some data from a Series 3a to a Series 5, and then we settled down to a cup of coffee and some Selkirk bannock that Mum had brought me, and some great chat about life, motor racing and rock ‘n’ roll.

I say “we” but (a) I don’t drink coffee, and (b) there was only one slice of bannock left as I’d taken the rest to work that day and shared it with a few folks in the office. 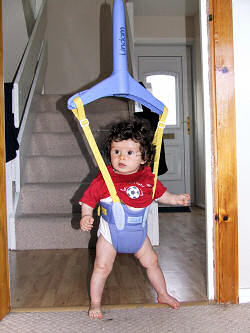 It’s nice to bump into old friends, and Friday was the day for doing exactly that. In the morning I bumped into a couple of staff from my St Mary’s days as a student; it was great to catch up.

Then in the afternoon I met another couple of St Andrews’ friends: Ian and Karen Parkinson and their son Joe. A few of us (from the Mary Celeste Suite — everyone else in the office is on holiday, it would appear!) were on an office outting to Janetta’s for a mid-afternoon ice-cream when we met them in the queue as we were leaving the shop.

In the evening my brother Eddie drove over from Thornton, near Glenrothes, to pick me up and take me to South Queensferry, in preparation for Jane’s arrival on Saturday. We spent the evening eating stodgy things covered in gloop (pasta with industrial-strength cheese sauce, followed by cake with crÃ¨me anglais) and watching Metal: A Headbanger’s Journey documentary on DVD.

What was lovely was spending more time with my nephew Owen, who is growing up so quickly. He’s such a cheery and contended little chap, always giggling and taking an interest in whatever is going on around him.

After a couple of hours working on the book on my new laptop (more about that in a later post), I set out to Edinburgh Airport to meet Jane. Via PC World and Staples, from some essential supplies.

I’d timed it perfectly: Jane’s plane from London Gatwick was due in at 15:45, I arrived at 15:35. Enough time to park and get to the UK arrivals with time to spare. But checking the arrivals board I discovered that there were UK-wide disruptions, caused by thunder and lightning storms in England I later discovered, and Jane’s flight wouldn’t arrive until 16:40.

As I was standing looking at the arrivals board, a text message arrived on my phone. It was from Jane’s sister Soo, telling me that Jane’s flight had been delayed by an hour (you don’t say!) so don’t bother going to the airport quite yet (too late!).

When I rang Soo back she invited me over to her house (in South Queensferry) to wait. But an hour is easy to fill. I fetched my A4 notebook from the car and sat making notes about my current chapter in the Mahjong book, I read some of the latest edition of Personal Computer World magazine (whose accompanying CD/DVD has a full version of Snag-It 7 screen-capture software), and I sat watching people — one of my favourite public pastimes.

After Jane arrived, to many whoops of joy and delight — from everyone in the airport. I’m sure. Although they might not have been demonstrating it outwardly, I’m sure their hearts were as aglow as mine was! — we drove back to Sunny Queensferry for a celebratory barbeque. By the time the BBQ had heated to the appropriate temperature and the burgers had cooked the sun had disappeared, and so had our hosts (Bec and Eddie) to attend to Owen’s night-time routine.

Having been up for the best part of 32+ hours, and crossing umpteen timezones Jane is enjoying a well-deserved sleep.

I wonder whom I’ll meet this week…?