Hoorah! My Mum has come to visit me in Cellardyke. This evening we went out (as usual) to hang out with the Cellardyke Massive down by the outdoor swimming pool and kiddies play park, looking for some adventure. It’s right opposite the East Neuk Outdoors an adventure centre on the outskirts of Cellardyke, so where better to look for it? 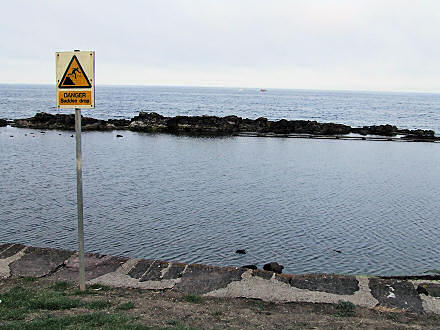 We’d been there for literally not very long at all when Mum spotted something on the horizon: was that a lifeboat pulling another boat behind it? I was too busy laughing at the sign of the idiot falling off a cliff. “DANGER Sudden drop” the sign read. 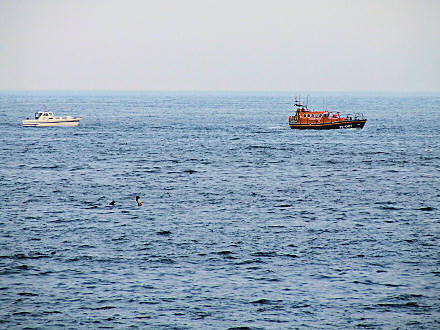 I zommed in with my digital camera. But that did nothing, so I zoomed in instead and discovered that indeed it was a lifeboat. How exciting! It was like something from the Famous Five. Only instead of uncovering a fiendish plot by a team of international diamond smugglers in caves off the coast of Devon, we’d spotted a couple of boats, one of which may or may not have been in any danger whatsoever. And instead of four young cousins and their dog Timmy on a summer holiday, it was me and my Mum. On a school night. 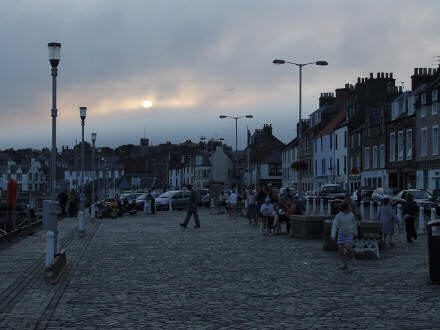 Mum decided that the only course of action was to follow the boat to Anstruther harbour. Which foiled my plan. I’d purposefully decided to walk in this direction because I knew that it didn’t lead very far. It would give us a short amble, allow Mum to see the sea and then we could totter back to the house for a nice sit-down, a cup of tea and a bar of chocolate that Mum had bought specially for the occasion.

But instead, Mum had spotted adventure, and like a press member from the Daily Bugle followed her hunch right into Anstruther harbour, where we arrived just in time to see the RNLI lifeboat being tied up and a smaller dinghy still attending to the ‘following boat’.

There was a weird sun overhead. To be more specific, it was the normal sun, just masked in clouds. And stuff. 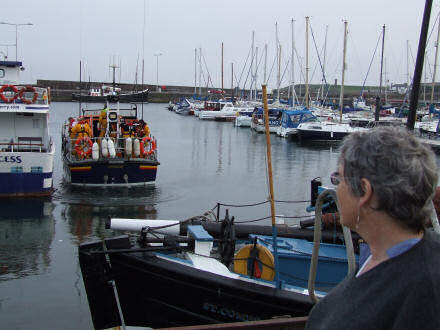 And that was it. This is a photo of Mum looking on. The harbour-side action consisted more of lifeboat men leaping from the big orange lifeboat to the May Princess and back again. One man had a cigarette, and another pulled the May Princess to the shore with a rope all by himself. In the background to the right you may be able to make out the ‘rescued’ boat. It’s the white one. With the mast.

Our journey back to our own wee harbour in Cellardyke was without incident. Apart from the daring helicopter chase, and the fire-breathing kittens. But that’s a tale for another day.