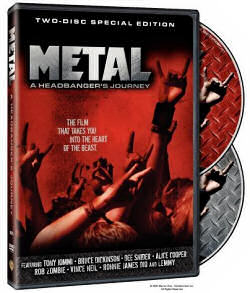 One evening last week I came home from work to discover a package waiting for me on my doorstep. “I don’t remember ordering anything from Amazon,” I said to myself as I ripped open the JiffyÂ® bag and pulled out a Digital Versatile Disc. It was a film called Metal: A Headbanger’s Journey, a documentary by metalhead and social anthropologist Sam Dunn.

FANTASTIC! This is the film that I wanted to see when it was doing the cinematic rounds of the United Kingdom in April. It came to the Cameo in Edinburgh and I would have seen it had it not been for my sheer inability to use a calendar.

“Come on Eddie,” I said to my brother on the telephone, “let’s go see Metal: A Headbanger’s Journey at the Cameo.”

“What time is it on?” he asked me. A fair question, all things considered.

My move to Fife had got in the way of my REAL METAL™ film watching. How inconvenient! But here was a copy of the DVD in my hands in my hallway in Fife. The mountain had come to Mohammad. Or something.

And I was right: I hadn’t ordered anything from Amazon. This was a gift. I pulled out the postcard that accompanied the film.

It was a gift, from a friend: a friend who visits Los Angeles. What kindness!

I bounded (lolluped?) up the stairs and popped it into the DVD player.

It turns out that my DVD player only plays Region 2 (Europe and Neptune) encoded discs. I’d got it for Jane in Inverness before the whole multi-region players thing hit it big. This DVD player cost around £150, rather than the £20 model that plays EVERYTHING™ you can now buy in Tesco these days.

Not to worry, I bounded up more stairs (we’re now on the 3rd floor now, in case you were losing count) to my study, booted up my PC and a cunning piece of free software called DVD Shrink which you can use to … erm, ‘back-up’ DVD discs. And in doing so you can also choose to cough remove the rather annoying regional encoding cough.

So that’s what I did. It took about an hour from start to finish, and then I watched the film in all of its backed-up, region-free glory. And I loved it. This is a wonderfully and passionately made film about the alternative culture that is metal. Those are my people, my culture, my music. I had almost every track that was played on the soundtrack, and those that I didn’t have I knew.

It’s well worth watching either in the USA Region 1 two-disc special edition or the Region 2 edition out on August 7 in the UK.