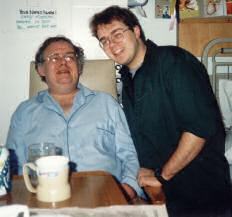 I love conferences (okay IWMW 2006 wasn’t a conference it was a workshop!) where you come away with little facts like the ratio of the long side of a sheet of A4 paper to the short side is 1:1.4142, which is 1:√2 (one to the square root of two).

A4 paper is genius! It’s an international standard (if someone could please tell the Americans, with their Letter size nonsense!) defined by ISO 216.

Here is what the lovely Wikipedia has to say on the matter of ISO A4:

A4 is a standard paper size, defined by the international standard ISO 216 as 210—297 mm (roughly 8.27—11.69 in). It is the normal size of paper for both domestic and business purposes in all countries except the United States, Canada, Mexico, the Philippines, Chile and other American countries. See paper size standards in North America.

ISO paper sizes are all based on a single aspect ratio of the square root of two, or approximately 1:1.4142. Basing paper upon this ratio was conceived by the German scientist Georg Lichtenberg in 1786