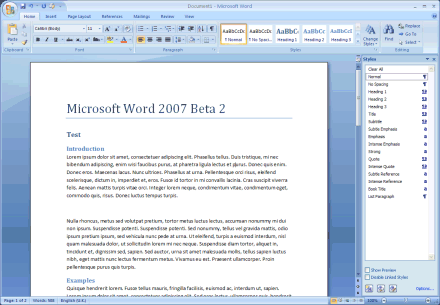 This afternoon I installed a few of the applications that come bundled with the Microsoft Office 2007 Professional Beta 2 package that I downloaded a few weeks ago, including:

As many of my friends will attest to I have long had a love/hate relationship with Microsoft software. While I’ve admired certain products, such as the Windows family of operating systems and Visio, I’ve disliked (with a passion) most of the Office applications pre-Office 2003. I found many of the Office products to lack an intuitive user-interface, and while many of the applications did speak to one another there was no continuity about how each presented common dialog boxes, for example. In trying to make the user’s life easier by integrating applications it was inadvertantly made harder by forcing users to have to learn subtle differences within each product.

While some of these niggles weren’t completely ironed out in Office 2003 the Microsoft boffins certainly improved a great many of the things that I disliked about earlier incarnations. The menus were now more intuitive, the commands that I wanted at my finger-tips (or at least at the end of my mouse pointer) were now there — and if they weren’t then I could customize the menus and toolbars.

I’ve been using Outlook 2003 for the last year or two, and it has some fabulous features that help me to focus on getting my work done, replying to e-mails, organising my task list and calendar. Word 2003 had improved so much, that I am now using it more than Lotus WordPro Millennium (which sadly appears to be in some kind of stagnation just now, in terms of development. Lotus/IBM still haven’t fixed a simple bug that doesn’t allow you to save files within your My Documents folder!) which I’ve been using since 1999. Similarly, I’m now beginning to move over to Publisher 2003, having been using Publisher 2000 since … well, since 2000.

So, having read about the new GUI that has been developed for (certain applications within) Office 2007, particularly the new “ribbon” toolbar I was delighted to be able to try them out for myself this afternoon.

And, I have to say that I really like it. I’ve had a quick jaunt through the other applications, but I’ve spent most time with Word 2007 this afternoon and evening. The application loads fairly quickly, in around 3 seconds, which is good. It looks clean and fresh and most importantly usable.

Gone are the confusion of menus, replaced with a much reduced menu bar of tabs which change which icons are viewable on the ribbon toolbar, which replaces the standard Windows menubar of yesteryear (and today). The icons are arranged logically and are grouped together well.

When you open Word there are five groups on the ribbon bar: Clipboard, Font, Paragraph, Styles and Editing. Enough there to get you started, and in fact take you quite a long way. The other ribbon configurations which, as I said are accessible via the reduced menu bar, are based around Insert, Page Layout, References, Mailings, Review and View. It’s a genius idea, and it works! No more hunting for simple and powerful features which are buried deep within a hierarchy of menus, everything is presented for you right there.

In the top left of the window is ‘The Pearl’, a Microsoft Office icon that when you click offers you a list of recently used documents and options for what to do with your documents: New, Open, Close, Save, Save As, and Print, but here you can also Publish to a blog or document server, or Send the document via e-mail or fax.

To the right of The Pearl is a small, customizable toolbar called the Quick Access Toolbar which can hold your most often used icons from both this menu, such as Save and Print, and the various ribbons.

The new features and new ways to do tried and trusted things with your documents are really fairly intuitive. The only thing that I’ve found myself puzzling over is how to view the About… information, which in Office 2003 and previous could be found by clicking Help > About. In Word 2007 you click the Pearl and select “Word Options”, from the resulting dialog window About is found under the Resources tab.

Here you can also check for updates, diagnose possible problems within the Office 2007 suite of applications, contact Microsoft, and register for online services. I particularly like the options to check for updates and diagnose problems. By moving this latter facility away from Control Panel > Add or Remove Programs it makes the product much more accessible to less technically-savvy users and makes it a more usable application. I wonder if it is also a recognition that there are problems to be found in a suite this big and complicated.

The only problem that I’ve encountered so far is that since installing these Office 2007 applications the junk mail filter in Outlook 2003 is now broken. And in order to test whether I’ve fixed the problem or not I’ve been in the strange situation of sitting in front of my PC all evening willing for people to send me spam!

(I’ve not fixed it. I suspect I’ll have to either live with this for the foreseeable future, as I check out Word 2003 even further, or uninstall Office 2007 Beta 2 and restore Outlook 2003 to its former spam-catching glory days.)

One great feature of Word 2007 is that when you hover over the various styles, for example, you are presented with a preview of what your current paragraph will look like if that style is selected. (Styles are another of my soap-boxes, which I’ll cover in a later blog post.) This is true also for tables, and text colours, but oddly not for other text formatting options, such as alignment and bulletted lists.

One of the interesting things about Word 2007 is that its default file format is XML-based. I won’t go into details about what this means — because I’ve already done it once with Jane, and while I got all excited and started waving my arms around, she just looked at me like I was mad — except to say that it’s exciting.

Well, as exciting as file formats can be. If you do get a chance to check out Word 2007 try the following:

While I might not agree with Microsoft’s mission and methods for world domination, I can’t deny that this is a jolly good piece of software. And come next year when Office 2007 hits the shelves, I really do think that I will upgrade. What I will need to find out first, however, is whether Outlook 2007 will still synchronize with my Psions.