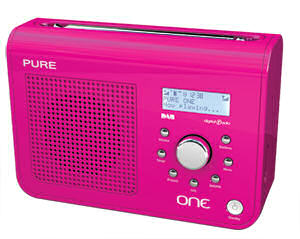 Sitting at my desk at work I asked Jane, on MSN Messenger a simple question:

And so pink it was. Of course, Jane had no idea what she was choosing in pink. But it most certainly is pink. If I couldn’t get my pink jumper then I’ll just have to make do with a pink DAB radio.

I’ve been wanting a DAB radio for ages. Digital Audio Broadcasting is clearly the way forward: it has a better, clearer and cleaner sound than good old fashioned FM Stereo, and it offers oodles more channels, serving up unforgiving quantities of pure, unadulterated ROCK music!

My brother Eddie and I used to play a game when we both had Telewest cable TV. We’d tune into Planet Rock radio and see just how long it was until they played yet another Pink Floyd track. It was never too long. Not that we were complaining.

I’m listening to Planet Rock as I write this, as it happens. We’re currently listening to Neil Young with “Southern Man”. The antithesis of Lynyrd Skynyd’s classic track “Sweet Home Alabama”.

STOP PRESS: The presenter has just said that he’s about to play “Sheep” by Pink Floyd!!

Having been investigating a number of DAB radios, I finally came to the conclusion that I wanted to get a Pure DAB radio. That is a DAB radio made by the company Pure. They consitently scored well in the What Hi-Fi? magazine polls.

The only problem is that Pure DAB radios are quite expensive. The Evoke range are priced between around £89 and £199. I definitely wanted one that could run on batteries as well as from the mains. I wanted something that had the option of a stereo output, even if it had only one speaker, and it also had to still be able to receive FM too. If for no other reason than Jane could use it with her iTrip, if iWorld ever get around to sending her the correct one for her birthday (we ordered black, they sent white).

And then I saw the Pure One. Available in white, black or pink. And then I read the reviews. And then I wanted one. And then I discovered that Argos in St Andrews sold them. And then I asked Jane a simple question: “Choose: pink or black?”

One thought on “Pure DAB brilliant!”