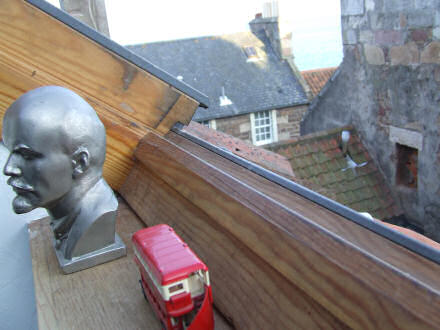 I think I must have said a couple of times in this blog that our current abode is but a stone’s-throw from our holiday cottage Kadesh. Well, here’s the proof that it is in fact right next door.

The photograph above was taken this evening, as I hung out of the back window that overlooks the garden at Kadesh. The red, tiled roof that you see on the right of the photograph is the roof of our wee cottage next door.

I did take better photographs than this one, but they didn’t show the bust of Vladimir Ilyich Ulyanov or a model of a vintage London bus, which I felt added an important socio-historic perspective and sense of scale, in every meaning of the word.

Technically it’s not ‘proof’ is it. It’s still just me telling you that it’s our house. 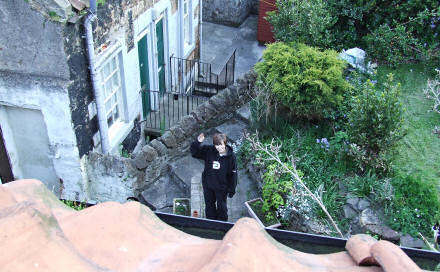 Okay, how about this one? It’s of Jane standing in the garden waving to me. Surely that is conclusive proof that she owns that property. You get 10 points if you can find our cat “Spot” in the picture. Jane actually popped next door (before ER started; it’s the last one in the series, seemingly) to find Spot’s brother Smudge, who has taken to spending his days under the house or in the garden next door. He clearly knows that we intend to move back in there after the summer.

In case you were wondering:

Which reminds me of this joke:

An Engineer and Mathematician were both given the task of herding 100 Sheep with the least amount of fence possible.

So the Engineer wrapped the fencing tight around the sheep saying “This Constant Radius Circle is the smallest perimeter for a given area and therefore is the best solution”.

The Mathematition made a much smaller circle (about a yard in diameter), stepped inside and explained “I define myself to be on the outside.”

It’s just a shame that the photograph of Jane herding the two cats out of the garden gate didn’t come out better, otherwise this post would likely have been less random and been titled “Pied Piper of Cellardyke”. You’ll just have to take my word that it was very amusing. And that it really is our garden next door.