This weekend began with a fairly relaxed Friday evening, sitting in bed watching Green Wing. In bed because (1) upstairs was the warmest part of the house, and (2) the small colour portable TV isn’t trying to show us LandsdÃ¦kkende kommerciel TV kanal. 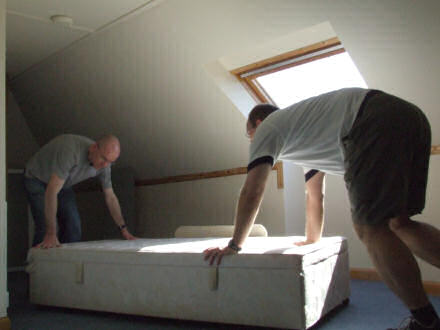 Not quite Pickfords, but definitely cheaper!

On Saturday morning (-ish!) we drove down to Edinburgh to help Jane’s sister Soo and husband Martin to move house. Martin is Soo’s husband, just to clear things up, not Jane’s. That’s me.

The photo above shows Martin and I removing the last remaining item of our furniture from 54 Drum Brae Park en route to its new life in the flat that Soo and Martin are moving out of. It’s complicated, I won’t bore you with the details. 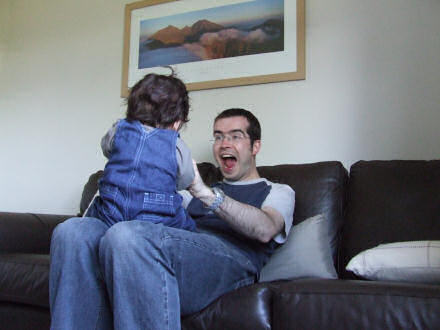 Just around the time that we felt that we’d probably helped enough — which coincided nicely with a quick trip to PC World (“Where in the world?!”) while Jane nipped next door and bought two McFlurrys at the McDonalds ‘drive-thru’! — we nicked off and visited my brother Eddie and his family for the rest of the evening. 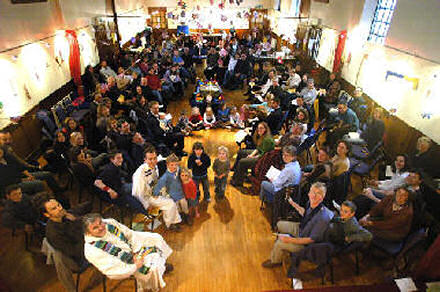 The congregation of St James, Leither. They were very patient while I took this photograph. From their website.

While we were still living in Edinburgh back in the first quarter of 2006 Jane and I said that if I didn’t get a job and we were renting in Edinburgh then we’d start attending St James the Less, Leith.

Of course, we don’t live in Edinburgh now, but this morning was a perfect opportunity to go along anyway. And how I wish we lived closer to Edinburgh now. We both loved the service. It was informal, but structured; it was relaxed, yet intensely focused on God; it was musical and arty, but not pretentiously so; it was personal, and also a community event.

The church building in which the congregation meet was originally the hall, I think. But it was decorated for the Easter season, in vibrant yellows, with wine glasses painted on shelves (“I am the vine, and you are the branches”), and something arty and wonderful hanging from the ceiling above the altar, which is in the centre of the room.

Walking through the doors (which have handles on the outside, which I pulled only to discover that you need to push these ones!) we discovered a table with various sheets and a hymn book on. As we started to help ourselves, an older woman got up from her chair and came over to speak to us. She introduced herself, and another man who came over, and told us which books we needed, and apologized that there was no-one on the door yet. But we were early. We arrived at 10:15, believing that the service began at 10:30, but seemingly they “gather” at 10:30 and start at 10:45.

What a difference worshipping “in the round” makes. No more ‘us’ and ‘them’. Readings and intercessions are done from where people are sitting. The person giving the talk stood in the middle and walked us through a presentation of his attendance at a friend’s funeral in Botswana last weekend. It was rich and moving and intimate and spoke of love. It was unusual, but there ought to be more unusual in the world, and in the church.

I felt at home at St James’s this morning. We may return there more often. 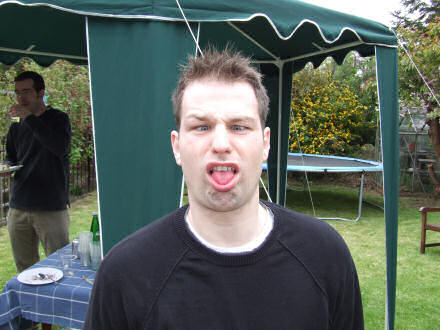 After an unsuccessful attempt to buy lunch — although to be fair we didn’t try very hard. Jane said, “I’ve got £20” but then we completely failed to visit any shop that sold food — I bought a new suit at Slater Menswear at 100 George Street, who I have to say have the nicest, most friendly staff in the world.

A bit of trivia: one of the women who works there, her husband is the guitarist for the metal band Holocaust; Metallica covered their song The Small Hours on their $5.98 EP in 1987.

Then it was time for the Powerpoint barbeque. A great end to a great weekend, and also to a great season of Powerpoint events (the Christian youth event I’ve been playing guitar at for a few years).

A big, un-narcissistic hello to all the lovely people at the BBQ who said that they read my blog / blob / blurb!

And now I’m back in Cellardyke, and Jane is tucked up in bed in Edinburgh. That’s the only thing about this great new life: Jane isn’t here half the time. 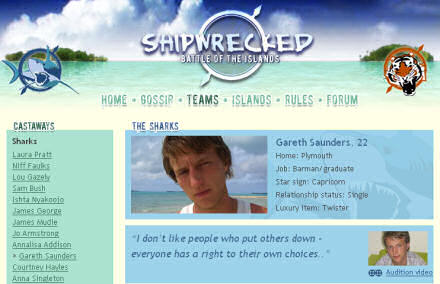 Seemingly I’ve been a contestant on the Channel 4 show Shipwrecked. And I didn’t even know it. And I’m now 22. Again. And blonde.

Honestly, I go away for the weekend and come back and now I don’t even recognise myself!