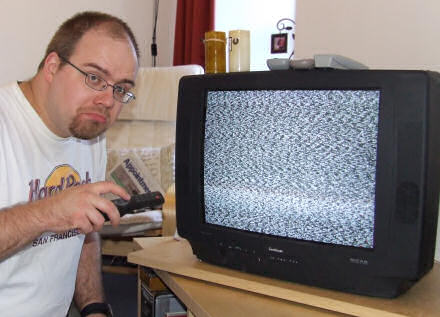 Jane has just popped next door to watch the final of The Apprentice on BBC2. For some reason, known only to the broadcasting gremlins our television isn’t working now.

Or at least, the television set itself is still working, it’s just we can’t get a good enough signal for our Phillips digibox.

I’ve tried lots of fun, technical things, like trying different aerials, and different cables, and connecting up a couple of different signal boosters. I even got really technical and started wiggling the cable like a mad thing. None of it worked. Even without the digibox, watching the good old fashioned telly tuned into the standard five terrestrial channels we only get pictures for two: BBC1 and Five.

It’s another telephone call to our friendly neighbourhood letting agents in the morning, then.