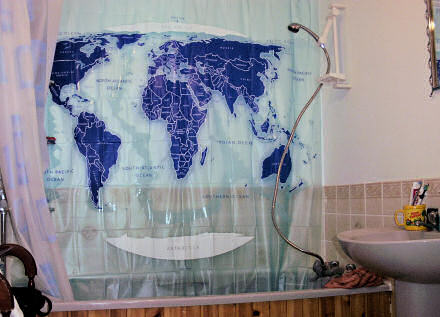 I love maps! If I had it my own way I would even own a map. So it was with delight the other day in Argos in St Andrews when Jane and I were gaily flicking through the Argos catalogue on our Quest to Buy a Shower Curtain™ that I spotted the world’s greatest PVC shower curtain.

Not only does it show the countries of the world, it goes as far as naming them too. And the seas. During my early morning bathroom visit today I learned where the Sea of Okhotsk is. I couldn’t have learned that from my usual bathroom reading material, like shampoo bottle labels or Guitarist magazine.

Last night during my internet wanderings I discovered a website (Visited Countries) that allows me to map where I’ve been in the world. It’s not perfect: I’ve never been to Alaska, and in Russia I only visited Moscow and St Petersburg (then called Leningrad), but it is quite fun. Here is my world:

Seemingly that means that I’ve visited only 5% of the countries of the world. I’ve probably travelled further online!

2 thoughts on “Where in the world is the bath?”