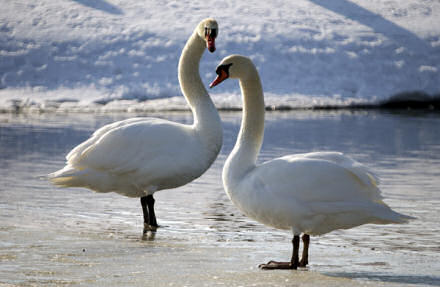 We’re moving to Cellardyke in a couple of days’ time. Up until last week when we told people that they would invariably ask “Where?!” Now they say “Oh!!”

Anyway, it’s all looking safe. No threat of Avian flu making the leap to a human pandemic quite yet. We telephoned DEFRA, on the advice of our vet, and they advised that we can let the cats out when we get there. All is looking good. And I’ve also heard that the news frenzy has also been good advertisement for Anstruther and Cellardyke. I’ve heard that people have been flocking there.

I spotted this on The Register the other day:

Government vets say the swan found to have died of bird flu in Scotland may have just washed up there from the continent. The genetic signature of the swan’s infection matches that of an outbreak in northern Germany.

It’s been identified as a whooper swan. Although they winter here, the lack of any other cases has caused experts to say it’s more likely the unfortunate fowl died abroad. The BBC reports that the “working hypothesis” in Whitehall is indeed that the swan died elsewhere and was washed up at Cellardyke.

It’s taken until now to identify the swan’s species because it was badly decomposed and lacked a head.

Looks like the Queen’s own British mute swans (she also owns all the dolphins and sturgeon, apparently) are still unscathed. Stiff upper beak, lads. Â®