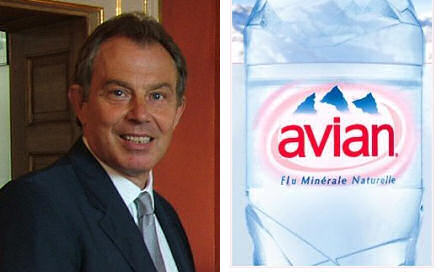 With all this controlled hype in the media about Avian ‘flu. It got me thinking: I wonder if we ought to be more worried now about TB.

Early in the morning on the first day of the week, while it was still dark, Mary Magdalene came to the tomb and saw that the stone was moved away from the entrance. She ran at once to Simon Peter and the other disciple, the one Jesus loved, breathlessly panting, “They took the Master from the tomb. We don’t know where they’ve put him.”

Then the other disciple, the one who had gotten there first, went into the tomb, took one look at the evidence, and believed. No one yet knew from the Scripture that he had to rise from the dead. The disciples then went back home.

I remember going to church on Easter Day one year when I was on tour with the National Youth Choir of Great Britain. We came out of church and a friend of mine who didn’t claim to be a Christian exclaimed “Alleluia! He has risen indeed… well somebody had to say it!”

Because the vicar had completely failed to mention anything about Easter during the entirety of the service and sermon! And that fact had registered with my friend. It made an impact on him.

But Easter is a time for being shaken out of complacency and encountering the Risen Christ. And to remember that he was put to deathâ€”by that efficient killing machine, the Roman Empire.

Their methods for dealing with criminals would make anything that may be going on in Guantanamo Bay pale into insignificance. Crucifixion was the single most cruel way to kill someone: nailed through the wrists and ankle, and left to hang in agony, until their strength gave out and they could no longer hold themselves up enough to breathe. They would eventually die of asphyxiation. It was a long, cruel, shameful and agonizing death.

And Jesus suffered and died, like that, for me; for you; for each one of us.

But today, He is alive! Jesus has conquered death and is alive!

That has to be the background to the Gospel â€” the Good News of Jesus Chirst: God’s love for humanity and His desire to do everything possible to draw us back to Him.

The first example of love this morning is the love of Mary Magdalene. Tradition has it that she was a prostitute whom Jesus reclaimed, forgave and purified. Her love for Jesus was without measure. And here we find her at the earliest opportunity, as soon as the Sabbath restrictions relaxâ€”somewhere between 3 and 6 am journeying to the tomb to care for Jesus with the same degree of love after his death as before it. Such was her love for Jesus that she was first to the tomb in the morning.

The second example of love we find is the love of John himself â€” “the beloved disciple”. He was the first to believe that Jesus had risen. He was the first to understandâ€”to see Jesus’s grave clothes still lying in their folds, as though Jesus had simply evaporated out of themâ€”and to make the connection that Jesus’s body had not been stolen: Jesus had Risen! Jesus was Alive! Such is the power of love to believe.

The third example of love is our love for Jesus. It is our love for Jesus which we see in our-being-here together this morning, which we experience in our love for one another and which we take out into our everyday lives with us to continue Jesus’s mission to build the Kingdom of God: to share God’s love with others, to bring healing and make disciples of all nations.

So today allow yourself to be aware of the love that God has for youâ€”and accept that love, given freely by God; share in the love and gratitude that Mary Magdelene had for our Lord Jesus; and rejoice in the faith that we share with John that Jesus is indeed Alive!