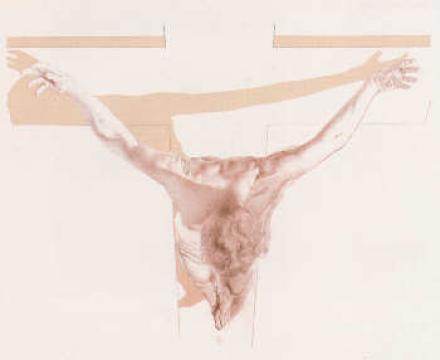 This afternoon I was invited to take part in the Comely Bank Council of Churches’ (CBCC) Good Friday act of worship: “Seven Words from the Cross”. I was given the second word: “Today you will join me in paradise”.

One of the criminals hanging alongside cursed [Jesus]: “Some Messiah you are! Save yourself! Save us!” But the other one made him shut up: “Have you no fear of God? You’re getting the same as him.
We deserve this, but not him â€” he did nothing to deserve this.” Then he said, “Jesus, remember me when you enter your kingdom.”
Jesus said, “Don’t worry, I will. Today you will join me in paradise.”
(Luke 23:39-43, The Message)

Barabbas?! What are you doing here?! I didn’t expect to find you standing at the foot of the Cross. You’ve got some cheek! They released you! Have you come to rub it in?!

Barabbas (The Last Words of Jesus)

They released me and chose Him. Then He rose and I fell down.

And they held Him a victim and a sacrifice for the Passover.

I was freed from my chains, and walked with the throng behind Him, but I was a living man going to my own grave.

I should have fled to the desert where shame is burned out by the sun.

Yet I walked with those who had chosen Him to bear my crime.

When they nailed Him on [my] cross I stood there.

I saw and I heard but I seemed outside of my body.

The thief who was crucified on His right said to Him, ‘Are you bleeding with me, even you, Jesus of Nazareth?’

And Jesus answered and said, ‘Were it not for this nail that stays my hand I would reach forth and clasp your hand. We are crucified together. Would they had raised your cross nearer to mine.’

… And at last He lifted up His head and said, ‘Now it is finished, but only upon this hill.’

And He closed His eyes.

Then lightning cracked the dark skies, and there was a great thunder.

I know now that those who slew Him in my stead achieved my endless torment.

His crucifixion endured but for an hour.

But I shall be crucified unto the end of my years.

(From Jesus The Son of Man, Kahlil Gibran)

In this monologue from Jesus The Son of Man, by Kahlil Gibran, Barabbas speaks to us of the on-going torment of seeing Jesus crucified in his place. Barabbas’s place in history is secured: the man whose place was cleared to make way for the Son of Man to be crucified. What does this do to Barabbas, a man on death-row, expecting any day to be executed.

How much are we like the first thief, who could not own up to what he had done; who could not accept that he deserved to be there. Full of anger, because we are not rescued from our sin â€” how much do we want God to wave some magic wand and to instantly and miraculously put right what we have done wrong in our lives? How easy it is to cry “Save me!” and to rant against God when there is no magic cure, no miraculous recovery, no legions of angels to swoop in to soothe us and bring wholeness.

It is the age-old problem, experienced from the days of Adam, of trying to set ourselves up as God. Of trying to assume for ourselves God’s role rather than accepting God’s grace. Instead of giving ourselves entirely to God: we want instead to crucify ourselves.

But look at the second thief. He had accepted what he had done. He wasn’t fighting the system. He wasn’t coveting Jesus’s cross. He recognised the price that he must pay for his wrong-doing and there he was hanging beside Jesus.

Crucially in his encounter with Jesus he recognised something of hope. He somehow recognised that this torture, this pain was not the end. This wasn’t the final word. There was more to come: “Jesus, remember me when you enter into your kingdom.” Jesus said, “Don’t worry, I will. Today you will join me in paradise.”

Today we are invited to allow Jesus to take our place on that cross. And when we do, to each one of us Jesus says “Don’t worry, I will remember you. Today you will join me in paradise.” 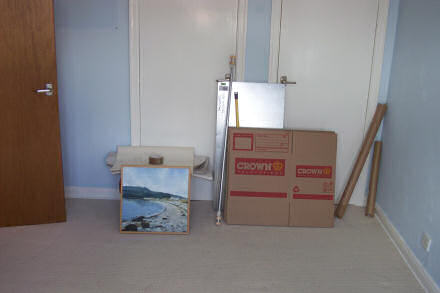 Yesterday was Maundy Thursday. It’s traditional that at the end of the evening Eucharist, during which we particularly remember the Last Supper and re-enact the washing of the disciples feet, to completely strip bare the sanctuary (the ‘pointy end’ by the altar). The stripping the altar takes place once the bread and wine have been taken to another chapel, symbolic of Jesus’s journey to the Garden on the Mount of Olives. The removal of all furnishings from the sanctuary leaves the place looking bare and empty, preparation for the blackness of Good Friday, and the emptiness of Holy Saturday. I find it a moving and sad service.

Well, last night, having stripped the sanctuary at St Ninian’s, Comely Bank I drove back home around 21:45 and we started doing much the same here. It finally began to sink in that we are moving.

I thought that I would find this move particularly difficult — and is has been on many different levels — but it occurred to me that there is something of a parallel with this period of Holy Week moving into Easter. The promise of New Life. Life will never be the same again. 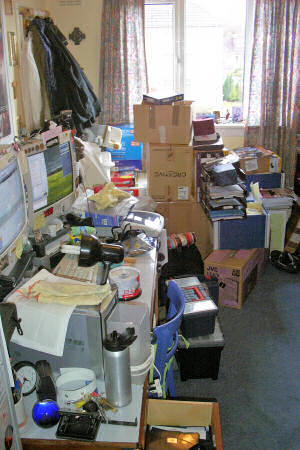 … now that’s not particularly conducive to any relaxing last minute work, now is it?!