Today was my day for the Lent Blog post. Here’s what I wrote:

Throughout his earthly ministry, Jesus encountered people, and people encountered Jesus. Jesus entered their into lives; sometimes to stay, while for others it was a temporary and passing encounter.Even when Jesus was condemned, even when He was dying on the cross people still encountered Him at a very deep level, which left them changed.

It was during the death of my own father that I realised how often we regard those who are dying as â€˜less-than-peopleâ€™ in many ways. We strip them of their humanity before they have gone, in order to protect ourselves from the pain and uncomfortableness of facing death.

Jesus, however, showed us that He lived life to the full, even to the very end. Even as a dying man, Jesus was still a whole man. In his human brokenness, God revealed his wholeness. 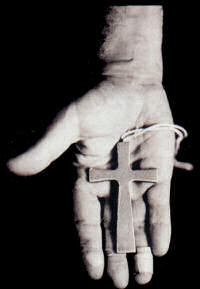 As weâ€™ve been journeying towards Holy Week Iâ€™ve been reflecting on those people whose encounter with Jesus within the confines of the story of the Passion changed their lives forever. People such as Barabbas, and the Centurion at the foot of the cross.

Their stories somehow feel incomplete and unresolved. They have no memory of Jesusâ€™s resurrection, only of His crucifixion which they selfishly claim some responsibility for themselves.

In doing so, in clinging to the crucifixion, they leave no place for God to transform death into new life. It is in encountering the Crucified Risen-Christ, the Risen Crucified-Christ, that our unresolved memories and hurts can be healed.