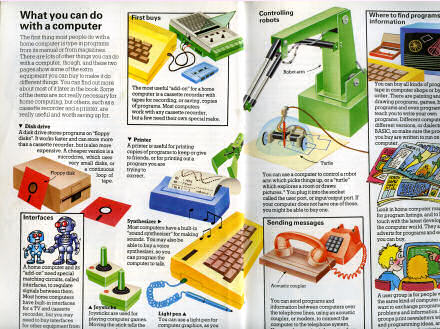 I love clearing up. Look what I found! Above is a scan of the first section of a book called Practical Things To Do with a Microcomputer by Judy Tatchell and Nick Cutler (Usborne Publishing, London, 1983). This is the first ever book about computers that I ever owned.

Back in 1983 (when I was 11) this book was packed with magic and potential and lovely computery goodness. Although it was entirely illustrated (not a photo to be seen) it still showed me pieces of equipment (peripherals I’d learn to call them) that I could only dream of, like thermal printers, robots, and acoustic couplers. Can you believe that there was also a section teaching you how to solder!

Chances are that you have a microcomputer; chances are that you are using it just now to read this blog. But what else do you use your PC for? E-mail, Web browsing, writing documents, playing games. Ever done any programming? That’s the difference between you and the youngster of 1983, they were forever programming. As this book opens:

The first thing most people do with a home computer is type in programs from its manual or from magazines.

“Have you played the latest Grand Theft Auto: Vice City add-on?”
“No, I’ve been too busy trying to write a device driver for the Red Hat Linux distribution using the binary language of moisture evaporators.”

The book goes on:

here are lots of other things you can do with a computer, though, and these two pages show some of the extra equipment you can buy to make it do different things.

Here’s what they had on offer:

Much of the rest of the book was an extended lesson in BASIC, one of the most popular translated computing languages of the 1980s. Chances are if you’ve owned a Commodore 64, Sinclair ZX Spectrum, BBC B Micro, Dragon 32, Oric 1, or similar then you will have at one time spent half a day typing in seven pages of closely typed BASIC and Machine Code from a magazine, only to find that it doesn’t run, and then the cassette deck has got jammed so you can’t save your work, and it’s tea time, and Knight Rider is about to come on, and there is a fight between your sibblings who want to watch TV but they can’t because your computer is plugged into the telly as you’re trying to debug 300 lines of code that look like:

That’s 300 lines of code that look almost exactly the same, but because there is no Ctrl+C to copy and Ctrl+V to paste on the Commodore 64 you have to type out each and every line. Line after line after line.

I never did build that robot. Or the “bitswitch” keypad. Or the binary display project. Because, funnily enough I wasn’t allowed near a soldering iron, one page tutorial or not. Instead I just looked at the illustrations and dreamed of the day that I would own a thermal printer and an acoustic coupler.

5 thoughts on “Practical things to do with a microcomputer”