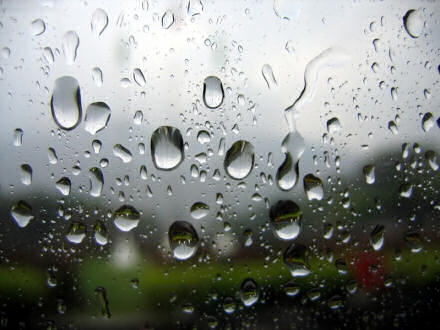 It’s funny the things you find while you are sorting things out in preparation for a move. Today I’m tackling the cupboard in the dining room that primarily houses most of our guitars (we have eight). I affectionately call it my ‘Guitarsenal‘. 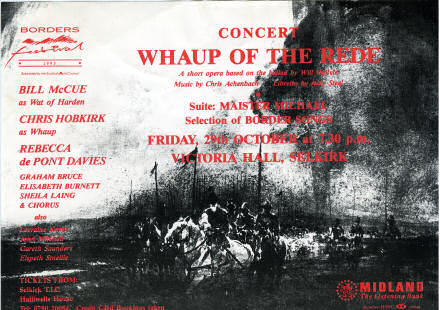 First, amongst some old guitar magazines I found this A5 flyer for a concert that I was part of back in 1993 — part of the Borders Festival — called “Whaup of the Rede“. As I recall, the first half of the concert was a concert of Borders music sung by local Borders musical legends such as Lorraine Kemp, John Mitchell, Elspeth Smellie, and er… me. If you look closely on the left-hand side of the flyer you’ll make out my name. I’m Gareth Saunders, by the way.

The second half was a short opera called Whaup of the Rede, based on the ballad by Will Ogilvie about the life of the Borders Reiver Scott of Harden. Music was by Chris Achenbach, who incidentally also wrote the song that I sang in the first half; Libretto (that’s the words) were by Lady Judy Steel.

The lead role, Wat of Harden, was played by big Bill McCue who was very entertaining during the rehearsals. Every now and then he would say things like, “Would you like to see ma willy?” in his deep, booming voice. We politely declined his kind offer each time. But it did make for very amusing rehearsals, gathered around the piano and table in Sir David Steel’s house at Aikwood Tower, near Selkirk.

I remember one evening being there as Sir David arrived back from Parliament in London. He pulled up in his Jaguar as we were loitering outside in the warm autumnal evening on a tea break. He was of course well known to many of those singing in the chorus, but I was still young and he was a bit of a celebrity in my eyes. I said hello, and laughed at the appropriate places. Thankfully big BM never offered to show his willy to the Rt Hon. Member of Parliament for Tweeddale that evening.

What I remember most about that whole experience however was the laughter. As a male chorus, we bonded well, we sang well (for the most part), and we thoroughly enjoyed it. 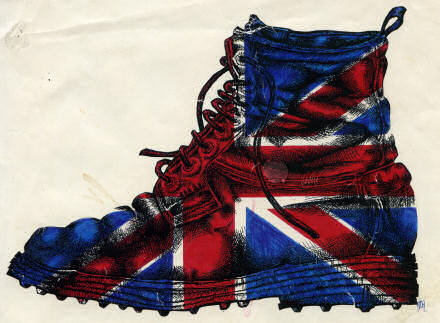 A couple of days ago I’d been emailing my friend Max Hargreave (aka Max MacAndrews) and had said that I had a print of one of his sixth year art exhibition pictures, but I couldn’t remember where. Well, today I found it.

It’s of a WWI soldier’s boot, overlaid with the Union Flag, and beneath it words from Wilfred Owen’s poem Dulce et Decorum Est:

“Men marched asleep. Many
had lost their boots.
But limped on, blood-shod. All
went lame; all blind…”

I always loved the simplicity and peacefullness of the illustration, constrasted with the harshness of the words. 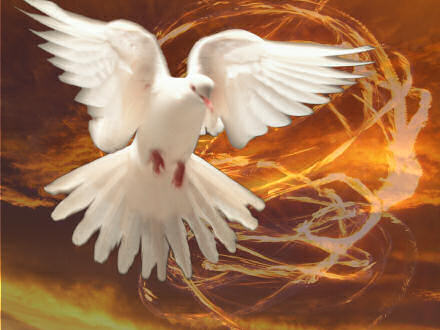 It’s not even Easter; blimey! it’s not even Holy Week, and I’m already having to think ahead to Pentecost for the next edition of Inspires, the magazine of the Scottish Episcopal Church.

Pentecost is that great Christian festival, falling 50 days after Easter, and 10 after the Ascension, that commemorates the descent of the Holy Spirit upon the Apostles.

When the Feast of Pentecost came, they were all together in one place. Without warning there was a sound like a strong wind, gale force–no one could tell where it came from. It filled the whole building. Then, like a wildfire, the Holy Spirit spread through their ranks, and they started speaking in a number of different languages as the Spirit prompted them. (Acts 2:1-4, The Message)

The Holy Spirit is often associated with the symbol of a dove, and of fire. The liturgical colour red. I tried to get something of those symbols in my image for Pentecost, above.

I would have said that friend and photographer-extraordinaire Steve Brown would have been proud of me for that image montage, but it lacks something of that bleak, post-apocalyptic holocaust feel that he does so well. Check out his work. (Warning the site doesn’t work 100% in Mozilla Firefox if you have particularly strict pop-up blocking.)

Anyway … back to violet, Lent and onwards to Palm Sunday and Holy Week.